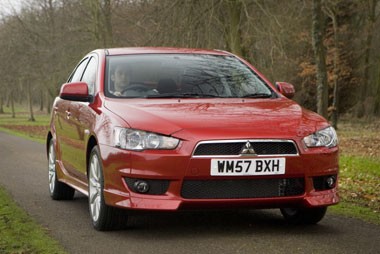 Mitsubishi has rarely made an appearance on fleet managers’ radars, except for those in search of four-wheel drive models.

The car range had traditionally lacked that one basic ingredient demanded by fleets – a diesel option.

Many would argue that the old range was lacking in other areas, including styling, excitement and, ironically given the name of one of its models, charisma.

“Most of our sales were into retail,” he said.

However, with the all-new Lancer things should change. The four-door version of this new lower-medium sector car has just arrived, and it comes with a diesel engine.

“This is our first real competitor in the sector,” says Mr Bradley.

A five-door version, including the 240bhp RalliArt hot hatch that sits between the standard Lancer and the awesome Evo X, will arrive in September.

Expect this RalliArt model, which premiered at Geneva as the Prototype-S, to compete against the Ford Focus ST on cost and power – it will be priced around £20,000.

Unfortunately, this staggered model launch means the more popular hatch is not yet available and so we can only, for now, get behind the wheel of the four-door car.

Mitsubishi has listened to its styling critics – gone is the unimaginative three-box look that defined the easily forgettable outgoing model.

It is replaced by a sleeker-looking European-designed saloon, which sits on standard 18-inch alloys and carries a more aggressive new double grille nose with style.

The interior is also a leap forward in terms of fit as well as the use of quality materials.

There is still plastic overkill and the dash lacks imagination – think functional rather than fun – but it is a world away from the depressingly dull Lancers of old.

The car is also roomier than the competition – Honda Civic, Mazda3, Ford Focus and Volvo S40 – and this is most apparent in the rear.

There will be a 1.5-litre 110bhp petrol engine in the hatch, but for the four-door models there is a choice of just three engines – the 1.8-litre 145bhp petrol, the Volkswagen-sourced 140bhp 2.0-litre turbodiesel and the manic 2.0-litre turbo petrol in the Evo X, which, for the UK market, pumps out 300, 330 or 360bhp depending on your wallet.

The diesel, which Mr Bradley predicts will make up 50% of the 5,000 Lancer sales he hopes for in the first full year, is the engine of choice.

Carbon dioxide emissions from the 1.8-litre petrol place it in VED band E (F for the CVT auto model), while the diesel sits in band D.

Fleets, especially police forces, are already showing an interest in the four-door version.

But it will not be until September that we will see any significant increase in Mitsubishi corporate sales.

When the two-model range is in showrooms – there will be no estate version – Mitsubishi predicts 20% of sales will be into fleet.

While information is still patchy, Mr Bradley confirmed to Fleet News that the Japanese manufacturer has brought forward the development of its own diesel engines by 12 months.

This means there will be a smaller, cleaner diesel-powered Lancer in showrooms by 2010.

Pricing, which Mitsubishi benchmarked against the Mazda3, is aggressive.

Above this sits the Evo X, which has already sold out of the current allocation.

This rally-bred car will make up a huge 20% of all UK Lancer sales – or 1,250 Evos from a total allocation for the whole of Europe of 3,000 units annually.

Mitsubishi’s entry-level Evo X, the five-speed manual FQ-300, is priced at £27,499, which is cheaper than the outgoing model.

CAP residual figures are strong – 37% for the four-door – which is higher than the Mazda3, Subaru Impreza or Focus.
Mitsubishi’s service plan should also appeal to fleets.

For the cost of a first service, the following three years’ services are free.

This applies across the range, even to the Evo X.

On the road it is the diesel, which pumps out 140bhp and 228lb-ft torque, that wins over the rather tame 1.8-litre petrol.

The diesel is noisier but the engine’s ability to punch its way up to motorway speeds makes the petrol alternative feel unresponsive and strained.

The ride is on the hard side, but not jarring.

On the track, all of the models react as expected.

Stability and grip are plentiful, and when the limits are approached, there’s lots of easily controlled understeer on the front-wheel drive cars and four-wheel drift on the Evo.

The stability and traction systems on the higher spec models are well set-up for the road cars, although they intervene too quickly in the Evo when it is tackling high-speed track cornering.

It can all, of course, be turned off.

The full four-door range comes with a ridiculous rear spoiler that does little except hamper vision – Mitsubishi clearly believes the Evo’s halo effect means drivers want a spoiler on the boot lid of a 1.8-litre petrol saloon.

The new Lancer is a massive leap forward.

The Evo X will always have a cult following, but now the full line-up has something to offer.

Fleets interested in strong residuals, Japanese reliability, competitive pricing and something that does not have a blue oval at the front should consider it.