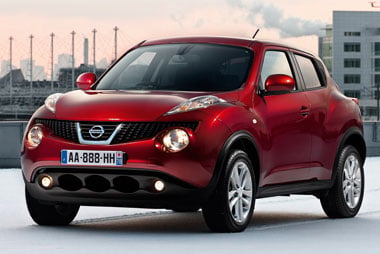 Nissan has done well by ignoring the conventional and seeking its own way.

Its ‘crossover’ Qashqai underlines this, with the pseudo 4x4 attracting customers from traditional hatchbacks and mainstream saloons.

The Juke aims to replicate that template, bringing a chunky SUV stance with a high driving position and sharp styling to the small car market.

On looks alone the Juke will certainly stand out, the dramatic lines mixing SUV cues with coupé styling – the roofline in particular looking particularly +rakish. Paul Wilcox, Nissan’s managing director, hopes to see the Juke gain the same sort of momentum that the bigger Qashqai has.

Indeed, Nissan’s sales figures in June look very healthy thanks to the refreshed Qashqai. Wilcox describes it as a “strong product with strong demand”.

He expects the Juke to do just as well. Priced from £12,795, the entry-level model comes with alloy wheels, air conditioning, six air-bags and electronic stability control.

Opt for the Acenta for around £1,000 more and those alloy wheels grow an inch and you get cruise control.

All but one model is front-wheel drive, with only the range-topping 1.6-litre turbo petrol engine available all wheels driven, via a CVT automatic transmission.

Nissan sees the Juke competing with both conventional superminis and new, more expensive rivals like the Mini Countryman.

Wilcox is confident of strong RVs, though of concern for fleet customers are the CO2 figures, with the lowest emissions of 134g/km for the 1.5dCi turbo-diesel model.

The likely biggest seller, the 1.6-litre petrol, emits 147g/km and returns 44.8mpg, putting it relatively high up the company car tax bands among its supermini rivals, and Nissan’s own Qashqai 1.5 dCi is able to better the diesel Juke on both emissions and economy.

Wilcox claims there are no plans yet for the introduction of CO2-reducing technology like stop/start.

The CO2 anomaly will hit running costs and is perhaps the biggest drawback for fleet buyers .

Otherwise, the Juke is a stylish, more practical alternative to that other fashionista supermini, the Mini.

The turbocharged petrol is quick, and despite the tall stance the Juke corners with enthusiasm, even if the steering is over-light and lacking in feel.

The diesel is a different proposition altogether, with its performance delivered low in the rev range, making it a less frenetic driver.

Driving position and refinement are good, though back seat passengers will find the sloping roofline encroaching uncomfortably into their headroom.

An attractive and interesting alternative for those wanting something a bit different.

It’s practical and well equipped and priced, but higher than supermini norm CO2 levels count against it for fleet users.