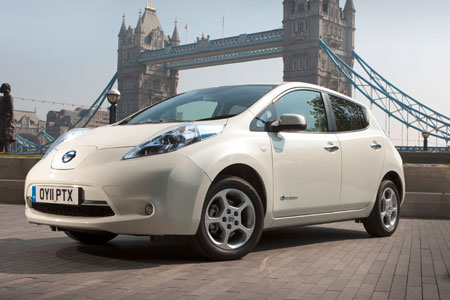 Voted World Car of the Year in 2011, the Nissan Leaf was described by the judges as the “gateway to a brave new electric world”.

It certainly is ‘brave’ when the combustion engine has remained the dominant power train for more than a century.

Nissan knows that, and it understands the uphill battle it faces in communicating EVs as ‘the future of motoring’.

Managing director Jim Wright’s focus is to get “bums on seats” and communicate the “economic benefits”.

“For user-choosers it’s a no-brainer if you have the driving cycle that suits it,” he told Fleet News. “But we need to look at removing some of the blockers to using the car on a day-to-day basis.”

In one sense, cost is one of those. The £5,000 plug-in grant helps, but the P11D price is still high (£30,935 before the grant). However, the running cost is competitive against a comparable diesel Golf, showing a slight advantage over the same four-year/40,000-mile operating cycle.

That advantage is lost when purely considering leasing rates. Quotes from www.comparecontracthire.com put the Leaf at £450-500 per month typically over the same cycle, while the Golf is comfortably below £300. So it all depends on the way a fleet calculates its costs.

The first thing that strikes you when climbing behind the wheel of the Leaf, apart from the space-age display and lights, is the silence. There’s a fan-like whirr, but that’s the main difference between driving the Nissan Leaf and an automatic petrol or diesel car.

There’s plenty of torque and, while its cornering could be better, the steering is responsive. The ride may be soft, it always feels stable.

The Leaf is built with purpose in mind and it expects you to treat it with respect in the same way its raison d’être is to respect, and not pollute, its ‘immediate’ environment.

If you drive a diesel car hard you’ll burn fuel. It’s virtually the same with the Leaf, except the downside is you can’t fill up at a forecourt.

Instead, you’ll suffer a drying of the mouth and a tightening of the chest. The symptoms of range anxiety are not helped by a display which shows your all-important range dropping by 15 miles when you’ve travelled only one.

But the Leaf is set up to help drivers plan their journeys. Standard sat-nav has a function that shows the driving radius at the current level of energy consumption, and can be updated to show the location of the latest charging points.

A bespoke smartphone application allows drivers to control some functions while charging, such as warming or cooling the car (which also can be controlled by a timer) remotely while it’s still plugged in to cut power consumption after being unplugged.

There might be issues over range and being unable to refuel quickly but compared to the other electric cars on the market to date, the Nissan Leaf feels a generation ahead.