IT’S unbelievable in this day and age how on several launches I’ve been asked by male journalists whether I’ll be writing about ‘where to store the tissues’.

The only reason I’m asked is because I’m one of few female motoring journalists, but for once I’m proving them right after driving the new Nissan Micra C+C, with its in-built tissue holder which definitely warrants a mention.

The Micra coupe convertible has got to the girliest car ever produced. The initial design team included two women who pored over the finer details to ensure that it will appeal to its target market – women.

Nissan is expecting more than two-thirds of buyers to be female and the features on the car show this.

Next to the tissue holder in the glove box there is a pen holder and a slot for cards. There’s a handbag hook (or curry hook as the more macho would prefer) in the passenger footwell and a nifty mobile phone holder in the fold-down cup holder under the dash.

A neat storage box sits under the passenger seat which easily fits a bag or briefcase and is locked alongside the central locking. A keyless entry system is optional on the basic spec and standard on the top of the range version, so no more fumbling for keys.

The four-seater C+C (although the rear seats are tiny and only suitable for children or vertically challenged people) has a two-part solid glass folding roof called the C-View, which folds down behind a large rear panel at the touch of a button in about 20 seconds.

There are three versions of the C+C available – the Tekna in 1.4 87bhp and 1.6-litre 109bhp guises and the Tekna Plus 1.6. All come with a five-speed manual gearbox, although an automatic version is planned for next spring.

THE C+C is well put together. All the materials are good quality, sturdy and feel like they’ll last – even the ice blue-coloured leather steering wheel.

Only the 1.6-litre was available to drive, which is the same engine as found in the 109bhp Micra 160SR and despite the extra weight the C+C is still fairly sprightly.

Despite the added mechanicals which come with an electric folding roof, and the extra chassis stiffening which comes with removing a hatchback’s roof, the C+C only weighs 50kg more than the 160SR at 1,490kg.

Motorway driving is easy and even on steep, winding hills the C+C held the road well, with little roll and little evidence of the extra weight blunting performance.

The chassis is rigid and feels solid. Even after hitting a sizeable pothole there was little vibration through the steering wheel.

Noise levels, which can often be a problem with some convertibles, were almost non-existent with the glass roof up and not too bad with it down. There were a few stray hairs but nothing to rush to my stylist about.

THE 1.6-litre version has enough power to make spirited driving possible and gives the C+C power to match its funky looks. This is sure to be a hit with us girls come next spring. 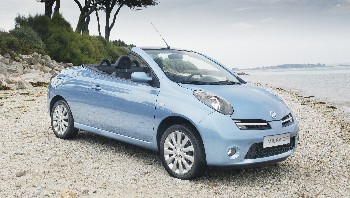