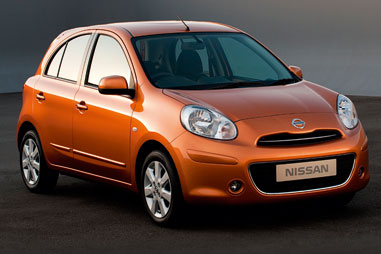 Nissan will turn its back on diesel power for small cars when its next supermini model goes on sale at the end of the year.

The Renault-Nissan Alliance’s trusty 1.5-litre dCi motor has been sidelined in the new Micra range in favour of an advanced three-cylinder 1.2-litre petrol engine with a raft of advanced technology.

Introducing the first petrol-driven car in its class with 115g/km tailpipe emissions and 56mpg average economy allows the Japanese brand to claim a breakthrough in eco-motoring for business and family use at prices from under £9,000.

“We’re in a unique position in being able to say that there is no longer any need for us to make diesel power available in the Micra and we think our engineering innovations will open the door to substantial extra business in the fleet sector,” said Nissan Europe regional product manager Thomas Ebeling.

He told Fleet News: “Each of our rivals needs a diesel engine to achieve sub-120g/km figures and there is a price for this. We think customers will no longer want to pay a 30% premium for this level of performance.”

Built in India alongside the car, the motor uses direct fuel injection to deliver 78bhp – 15bhp more than the sector average – with 81lb-ft torque.

But the performance gap is set to increase further in spring when supercharged versions with 97bhp and 95g/km become available at an expected premium of £850.

“Alongside factors like increased value and reductions in insurance ratings, this is a core feature that we think will take Micra business sales from 15% at present to more than 30% of the 18,000 units we expect to sell next year.”

Longer and lower, Nissan’s biggest selling model will come with five-door bodywork in three grades, two trim levels and the option of CVT. All are well specified, with the lead-in Visia including ESP, six airbags, ABS with brake assist and EBD, Bluetooth and electric power steering.

Also standard on the top version is parking slot measurement, a handy gadget that tells drivers if the car will fit into street parking spaces and a unique innovation in the segment.

Designed for global markets, the fourth-generation supermini abandons the quirky appearance of the current car in favour of styling aimed at being more appealing to male buyers.

Its extra length allows greater rear legroom and useful bootspace that extends from 265 litres to 1132 litres with the seats folded.

With a novel crankshaft design using unbalanced mass to filter the vibration usually found in three-cylinder engines, the new motor can be mistaken for a four-cylinder on idle and is smooth and subdued at low speeds.

The noise rises significantly as revs approach the 4,000 mark, but as 3,000 revs equates to 70mph, progress on major routes and motorways is quiet and relaxed for a city car.

With downsizing expected to boost B-sector sales by 30% across Europe by 2015, the latest Micra promises to win more friends with higher value, lower running costs and cleaner emissions.