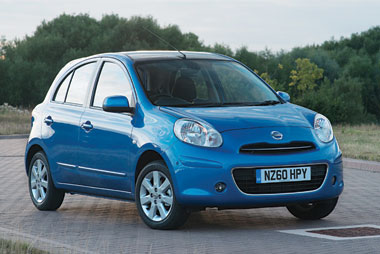 Production of the Nissan Micra helped establish the company’s UK factory in Sunderland as one of the top car plants in Europe.

Always a popular retail car, and with a strong presence in Motability and a decent fleet pool car, the last generation stood out thanks to its styling and value.

The latest model, which arrived in showrooms in January, is a little different.

Now built in India, the Micra has toned down the style with a more conventional appearance.

Nissan is unlikely to be worried that blander styling will be off-putting: it has another small car in its range – the Juke – that will appeal to those who want to make a statement.

The Micra will not be offered with a diesel engine.

The previous model’s 1.5 dCi diesel was provided courtesy of its Alliance partner, Renault, and it has reached the stage where a £1,000-£1,500 like-for-like premium on a diesel version doesn’t always make financial sense on a small car.

So for now customers will be offered a surprisingly keen 1.2-litre three-cylinder petrol version developing 80bhp, and with CO2 emissions of 115g/km for the manual version, or 125g/km for the CVT auto.

Given the 3% BIK tax supplement applied to diesels, and the lowest band applied to cars with CO2 emissions up to 100g/km, this version would appear more tax efficient than any diesel version might be.

Some things haven’t changed, however. Whereas most small cars have increased significantly in size over time, with cars like the Vauxhall Corsa, Ford Fiesta reaching four metres in length, the Micra retains its compact dimensions.

The Micra is also exceptionally well equipped when compared with alternatives in the same price bracket.

That stacks up well against other small cars at those price points.

Media colleagues who drove the car on a European launch event last September reported there wasn’t much to write home about regarding the driving experience.

Having driven the car in the UK, I found no such complaint. One of our Bauer staff members present on both European and UK launch events suggested cars available on the UK launch felt quite different, and that Nissan could already have responded to feedback from the earlier event.

The car is easily manoeuvreable around town and its 1.2-litre engine is responsive.

It’s also fairly refined when called upon to use the motorway, and manages to avoid the wearing sound quality of some three-cylinder motors at higher revs.

It rides well for a small car, and there’s decent space up front.

I found rear headroom rather tight, but on the positive side, this Micra is offered only with five doors so it’s never a struggle getting in and out of the rear passenger compartment.

As with most small cars, the interior materials don’t feel the same as on larger cars, and there are no soft-touch materials on the dashboard.

But it’s attractively designed and there is the option of a two-tone appearance on high-spec models.

The new Micra might not be the most exciting small car on sale, but it’s good value, well equipped and in the cost-sensitive small car market also scores well on running costs.