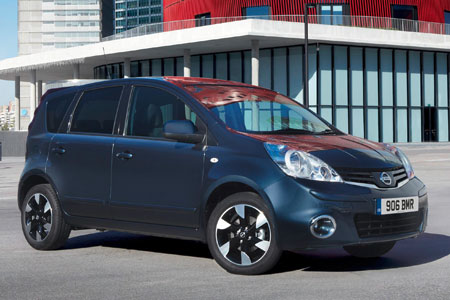 The Note is perhaps one of the unsung heroes of the small car sector. With a pricing structure that makes it competitive with some of the typical mainstream small cars on the market, the Note is also well equipped and offers a great deal more space.

We’ve already seen the basis of the car that will replace the Note in 2013 in the Nissan Invitation concept car, but for 2012 Nissan has boosted the specification of the Note to ensure a successful swansong and run-out period.

The Note sits in that category of cars based on conventional small cars but being a bit cleverer and offering a bit more space. Rivals would include cars like the Honda Jazz, the soon-to-be-launched Ford B-Max, as well as the Kia Venga and Hyundai ix20.

Like the Jazz, the Note is built in the UK, but its design and development also took place at Nissan’s UK facilities, and its replacement has also been confirmed for the Sunder-land factory.

With a wheelbase of 2,600mm, the Note is still one of the most generous in the sector, despite its relative age, and with a sliding rear seat, the Note also offers a great degree of flexibility when it comes to prioritising luggage space or rear passenger room.

The Note we tested used the familiar Renault-sourced 1.5-litre diesel engine, with 90bhp.

Both partners (Renault from an engineering perspective and Nissan from the installation and measures to reduce noise and vibration) have ensured refinement is impressive.

With a warm engine, there really isn’t any perceptible indication that it’s a diesel with the exception of the mid-range surge from the 148lb-ft of torque from 1,900rpm.

The Note has pretty deft behaviour on the road, too, with a lower roofline and lower centre of gravity than rivals helping to make it feel keener when pressing on along twisty roads.

Cars like the Jazz might have cleverer packaging, but it’s impossible to argue against the Note’s impressive interior space and the flexibility of the luggage compartment. It also proves an enjoyable drive.