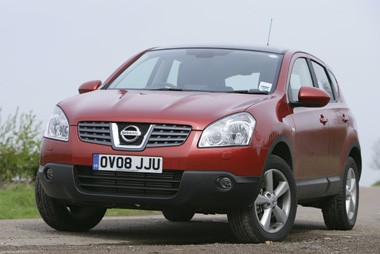 The image of a blood-stained wall has stayed with me since Fleet News’ Hit for Six conference.

It was shown as part of a hard-hitting presentation called ‘Dealing with death – how your fleet could be affected’.

That image, combined with the crash test footage from Thatcham, meant that I left the conference feeling more aware than ever of the need to get home safely.

Thankfully, with the Qashqai as my long-term test car, I know that I’m driving a vehicle which has a five-star EuroNCAP rating for adult protection.

The Qashqai received almost maximum points in the front and side impact tests, as well as the pole crash test, which looks at potential injuries to the occupants’ head. It also performed well in the child occupant protection rating.

I’m pleased to report that as well as being a safe vehicle, the Qashqai has been reliable, too.

I’ve been clocking up the miles with trips to Heathrow and visits to Fleet News Award winners, who are dotted around the country, and the Qashqai hasn’t let me down once.

Now, if only the same could be said of the car’s satellite navigation system.

There are plenty of features I like – the fact it tells you whether to ‘keep left’ or ‘keep right’ when the motorway is about to branch has saved me from going wrong more than once.

My complaint is that there’s no postcode setting.

At first I thought I might have overlooked a button or screen option, but I’ve since checked with Nissan and it isn’t possible to enter a postcode.

To work the sat-nav you input the city name, then the street name and then the building number.

Unfortunately, I often have to go to places that don’t have a number, such as test tracks and auction centres.

A recent trip to Burton-on-Trent saw me frustratingly close to the destination but unable to pinpoint it exactly.

Sat-nav aside, I continue to be impressed with the Qashqai’s gadgets.

The keyless entry is a particular favourite.

To open the door all you have to do is press the small black button by the door handle, with the ‘intelligent’ key in your pocket or bag.

I’ve become so accustomed to it that when I drove another car recently and had to use a key it almost seemed a hassle.

The Qashqai also scores big on design. ‘Funky’ is the general verdict. Nissan says that from certain angles it has the agility of a passenger car, from others the tough stance of an SUV.

Its looks have certainly won people over, with sales of the Qashqai outstripping Nissan’s expectations.

In fact, in the Peterborough area, where Fleet News is based, it’s been a case of ‘count the Qashqais’ in recent weeks.

But am I really seeing more Qashqais? Or is it the same handful of cars, all driving around lost?