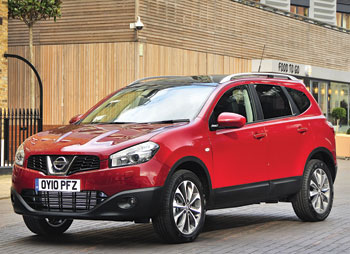 Nissan’s Qashqai has been a huge success as the company tried to steer away from the traditional lower-medium car formula.

It has been one of Nissan’s most popular cars and earlier this year, both the standard Qashqai and the seven-seat Qashqai+2 underwent mid-life revisions.

The Qashqai+2 competes against compact seven-seat people carriers, such as the Vauxhall Zafira, Peugeot 5008 and Citroën C4 Picasso.

Like the standard Qashqai, four-wheel drive versions are available, but for the 2010 revisions these are restricted to top end versions.

And those top end versions can appear quite expensive: we tested a 2.0 dCi Tekna which is priced at £24,545 on the road, just undercutting top versions of the Zafira, but higher than equivalent versions of the Grand Scenic, 5008 and C4 Grand Picasso.

However, a relatively strong residual value ensures its depreciation is competitive with those rivals, while its CO2 emissions of 159g/km should enable it to remain attractive.

The Qashqai probably has appeal for employees who need a people carrier but don’t like the idea of driving one.

With a sharper front end since the model was revised earlier this year, the Qashqai is distinctive and, despite it being longer than the five-seat model, disguises its bulk very well.

Although its interior is well designed – and those third-row seats are best-suited for children – it is rather drab all in black.

However, it holds the road well and offers an engaging drive for something so tall, with responsive steering and good composure on twisty roads.

Tekna models are loaded with kit, but even lower down the range, alloy wheels, Bluetooth integration and air conditioning as standard.

The Qashqai+2 is maturing into a desirable and capable compact people carrier alternative with high levels of equipment and a decent driving experience.