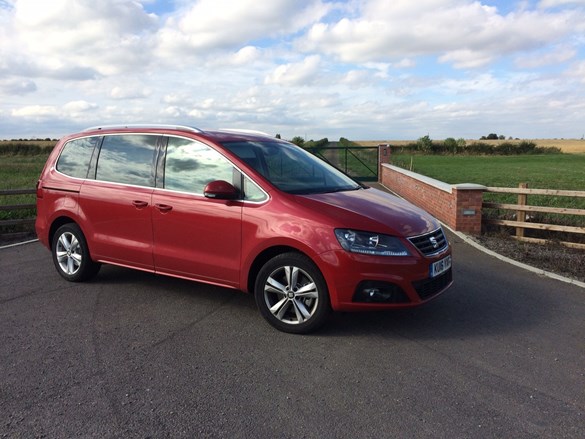 The Seat Alhambra is new from the wheels up. It’s a full-size, seven-seat people carrier and is designed to ‘fit elegantly into the Seat line-up, fulfilling the expectations of family life as well as the demands of high-mileage business drivers’, according to Seat.

It is offered with a choice of three engines – 1.4 petrol and the choice of either 2.0 150ps or 184ps diesels. The 2.0 TDI SE Ecomotive 150ps on test here is the most popular choice for fleet drivers, offering stop-start and brake energy recovery systems. Our vehicle also has the navigation system, powered sliding rear doors and tailgate fitted from the options list (£1,255 and £1,020) although it is worth pointing out that these are included on the next model up, the SE Lux.

The official fleet-crucial figures for our model are 55.4mpg and 132g/km, making the Alhambra a close match to the Ford Galaxy (56.5mpg/129g/km), at least on paper. The Alhambra is mechanically identical to the Volkswagen Sharan and bears more than just a passing resemblance in looks, too. Both could have benefited from a little more time in the style department.

For a near two-tonne vehicle, the Alhambra feels relatively light on the road, is tight in the corners and the 2.0-litre diesel offers a pleasing amount of power and, overall, an enjoyable drive for such a large vehicle. It is also very smooth and quiet at motorway speeds.

As far as meeting the demands of ‘family life and the high mileage business driver’, my experiences are mixed so far. Its size and spec are huge plus points, the electric doors are a must-have and provide plenty of amusement for children, but the fuel economy so far is very disappointing. I have managed an indicated 42mpg on a good run but, more often than not, the display is hovering around the high 30s, which just won’t cut it in today’s market.