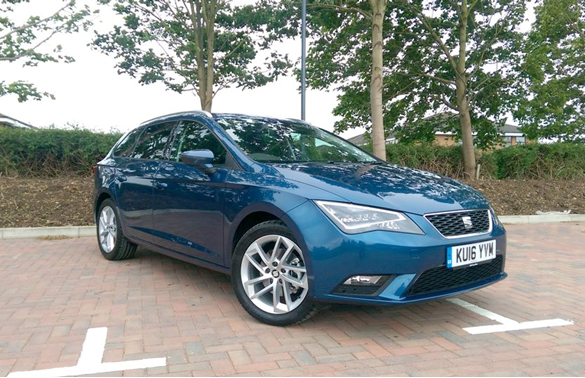 After two months on our fleet, the Leon ST SE Business edition has returned to Seat. The manufacturer has discontinued the business trim to focus on the SE Dynamic, which can be ordered with a wider choice of engines, optional equipment, colours and DSG transmission.

The new model has a P11D value of £21,170 including optional ‘Apollo’ blue metallic paint and automatic lights and wipers – a £205 saving on the outgoing model, representing a slight drop in benefit-in-kind (BIK) tax (£10 per year). The Full Link navigation system is still included alongside Bluetooth and cruise control. And styling is improved thanks to larger alloy wheels and tinted windows.

Although this appears to represent good value, two key options have been removed: adaptive cruise control with automatic emergency braking and parking sensors. Adding these fleet-friendly features increases the price by £810, with a £4.85 increase in monthly BIK tax.

The SE Dynamic is powered by the same engine as before, a 1.6-litre TDI with 110hp. Performance is best described as ‘adequate’; in most scenarios it delivers just enough to not feel sluggish. You do have to work the Leon’s five-speed gearbox when joining motorways or overtaking which makes the drive less relaxing. But more irritatingly is the engine noise at 70mph, which is far too intrusive.

It does, however, feel extremely well made. Aside from some hard plastics around the dash, the interior is well laid out and switchgear feels satisfyingly solid.

Fuel economy has also been impressive; on longer trips I have regularly averaged more than 65mpg and even pootling around town the reported figure rarely drops below 50.

On the outside, the Leon’s sharp styling, combined with the LED signature headlights, gives the car a Germanic motorway presence. It certainly looks more premium, with aluminium roof rails completing the package.