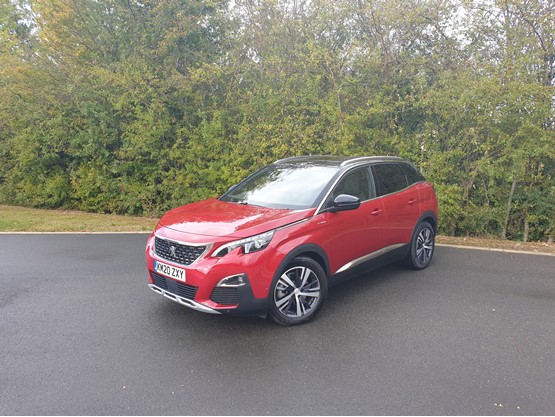 “I didn’t believe a Peugeot could be so good.” I did say those words when gathering first impressions of the Peugeot 3008 when it arrived with Fleet News in October.

In my defence, my experience was limited and opinion based on only driving the likes of the 206, 406 and 307 in the past 20 years. More aggressive looking on the outside than the Citroën C5 Aircross and the Vauxhall Grandland X, with which it shares underpinnings, and sportier on the inside, our 3008 came with a generous spec sheet, befitting its £46,750 price. Top of which for this driver’s enjoyment was the Focal 10-speaker stereo system, panoramic opening glass roof and Visio Park 360-degree colour camera – useful for manoeuvring the car to enable plugging in via a three-pin plug and Type 2 connector down the side of my house. 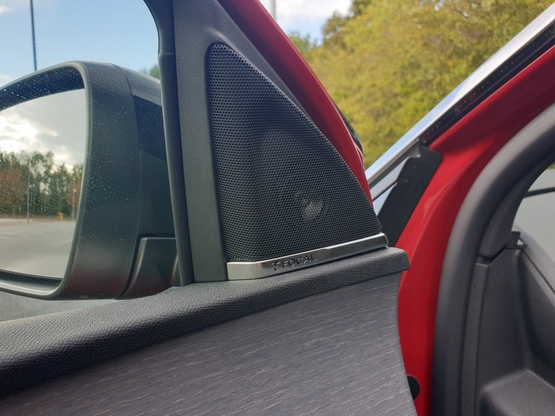 The build quality is excellent, too.

The flattened steering wheel suggested an F1 car, but is really to allow clear view of the digital instrument panel and was actually very easy to get comfortable with.

At 300PS, the 3008 GT Hybrid4’s engine, the petrol 1.6L PureTech, is one of the most powerful ever fitted in a Peugeot. It provides the sort of smooth response through the eight-speed transmission that helps with the disappointment of running out of battery charge on any journey of more than around 28 miles (I got nowhere near
the 36-mile WLTP figure), with the change from between power sources unnoticeable.

I’ve done about 2,200 miles in the 3008 in six months. Stats on the MyPeugeot app show an average combined fuel consumption of 171.2mpg, exceeding Peugeot’s figure of 166.2mpg.

There was much to change my dated mindset. Its new facelift (www.fleetnews.co.uk/3008-facelift) should only increase its appeal for those already in the know
about the 3008’s strengths.

It will achieve more than 70mpg

With its fully charged battery providing a range of around 22 miles on electric-only power, it’s got to be acknowledged most of the distance covered in this 3008 Hybrid4 will be done using its petrol engine.

But, how does that impact fuel consumption? It’s something Which? looked at, measuring the ‘real-life’ fuel efficiency of PHEVs compared with their claimed efficiency. It found that PHEVs were 61% less frugal, on average, than claimed.

So, how does our 3008 fare? Looking at the stats provided by the MyPeugeot app it reveals my average fuel consumption over a 55 mile journey was 165.2mpg. Peugeot’s figure is 235.4mpg.

On longer trips, where the petrol engine does more work, the mpg falls to 75.3 – still creditable for an all-wheel drive SUV with such a powerful engine, but a way off the claimed figure.

Using its own real-world test data, Which? gave a figure of 67.3mpg for the 3008. We believe this is a pretty accurate expectation for the average driver. If you don’t plug it in at all, however, the car will struggle to achieve more than 40mpg.

The sportiest of it stablemates

The underpinnings of our Peugeot 3008 are shared with both the Citroën C5 Aircross and the Vauxhall Grandland X. Each exhibits different personalities.

The Citroën is comfort-focused, with big squishy seats, curvy body panels and soft suspension. In the Vauxhall it’s more conventional, with a simple dashboard layout and inoffensive styling.

Peugeot has gone sportier. The 3008 provides a more aggressive look and dynamic chassis.

The 3008’s interior is the most unique in the segment, thanks to Peugeot’s i-cockpit layout. It positions the digital instrument cluster high on the dash, above the steering wheel. To make it all work, the wheel itself is flat at the top and bottom, an attribute that takes a while to get used to. 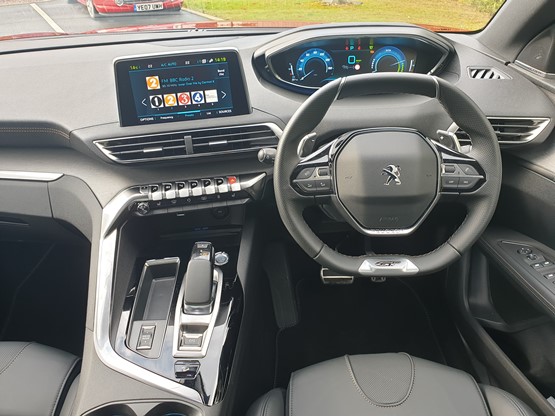 Combined with the Peugeot’s sportier suspension setup, it makes the 3008 feel more immersive to drive than any of its rivals. Driver appeal is boosted further by the Hybrid4’s combined 300PS power output and all-wheel-drive. Our only criticism of the setup is the eight-speed auto transmission, which sometimes takes a while to wake up and deliver the power when you need it.

Does it leave you wanting for nothing?

It’s all very well having the latest propulsion technology at your feet – with more below your seat – but, if it feels like you’re driving a Flinstones’ foot-mobile, the appeal will soon wear off.

Fortunately, should the 3008 Hybrid4 find its way onto your choice list, this will not be a problem.

There is a £20,000 gap between the lowest priced 3008, the petrol-powered 1.2 PureTech Active Premium, and our range-topping model, which is now known as the GT Premium Hybrid4.

Click here to read about the specification changes on the latest Peugeot 3008.

This is because on top of the features common to all 3008s there are at least as many more that push it into the luxury status as you upgrade. 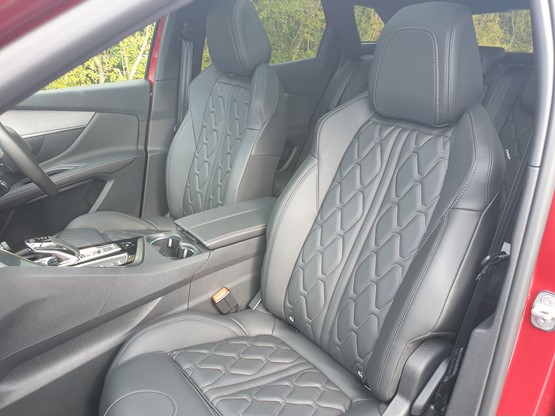 Given this car emits the second lowest levels of CO2 in the range (at 29g/km) and so has a limited environmental impact, how will this 3008 impact on you? As Peugeot states, “any journey, no matter the distance, will leave you wanting for nothing”.

Company car drivers and fleet managers alike are being led by benefit-in-kind (BIK) rates and WLTP to focus their minds on electric vehicles and manufacturers are responding with all- or partially-electric models.

So, this report is dedicated to the promise of 3008’s plug-in hybrid electric performance and some of the real-life experience I’ve had during what, admittedly, remains a near lockdown lifestyle, having little reason to travel very far with our office – 30 miles from home – closed except for essential use.

Peugeot says the car has a 40-mile (WLTP) range when fully charged, helping achieve a 6% BIK rate. I’ve driven the 3008 for 529 miles in the past two weeks, mainly on runs from home to the nearest town and the electric range has been around the 29-mile mark.

Without a charge point installed at home, I’m using a three-pin domestic plug to recharge the car. This will fully charge it in about six hours from empty. 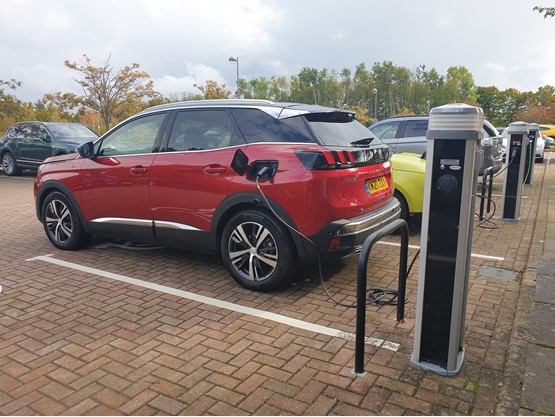 Were I to use a wallbox or public charge point, the car would still take four hours to charge as it only has a 3.7kW on-board charger.

There is an optional upgrade to a 7.4kW on-board charger for £300, which will cut the charging time to 1hr 45m.

And to be completely clear on this last point, the car will charge at 3.7kW or 7.4kW dependent on which on-board charger is fitted.

Recharging the car at home costs roughly £1.66, based on the average domestic tariff. Covering the same 29 miles on petrol alone, assuming an average consumption of about 40mpg, would cost £3.78.

There is also the ability to adjust the amount of electricity range to be reserved, allowing you to force charging by the engine while consuming more petrol. This can be set in the car via a lightning bolt symbol on the centre console between six, 12 and maximum available. You can also switch this function off.

Peugeot’s first plug-in hybrid joins the Fleet News long-term test fleet just as new car registration figures from September reveal the popularity of diesel in this plate-change month continued to decline with a dramatic fall of 140% year-on-year, while that of petrol plug-ins soared 140%.

It’s timely then that, until March, I’ll be testing the heady mixture of efficiency and high performance encapsulated in the 3008 Hybrid4.

But, this is also the most powerful Peugeot produced to date. 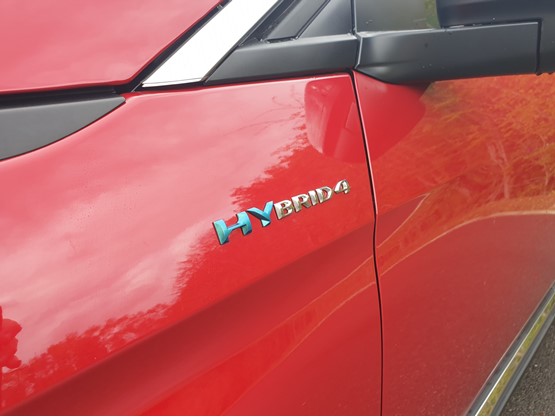 It has a 1.6-litre turbocharged PureTech petrol engine and two electric motors, giving 300PS and providing a 0-60mph time of just 5.9 seconds. The Hybrid4 is also the first model in the 3008 range available with four-wheel drive.

Helping to ensure I make full use of the features available and peace-of-mind in using a hybrid is the MyPeugeot app.

Downloadable free via Google Play and the App Store, you input the car’s VIN number and an email address to make use of fuel consumption tracking, technical alerts, pre-conditioning, as well as charging state, rate and range.

In one sense, the 3008 is not new to me. It shares a platform with the Citroën C5 Aircross and Vauxhall Grandland – both cars I’ve driven recently. And in 2019, the 3008 won the Fleet News Award for best mid-size SUV.

In the coming months, we’ll see how well the Peugeot compares with its peers and if it still leads the pack.