I’VE decided that car manufacturers should make more use of disclaimers. A week driving Peugeot’s new 307 HDi 110 prompted this new-found cynicism, although such troubles aren’t unique to Peugeot. My problem is with figures for fuel consumption. Manufacturers are required to provide figures from tests carried out in a laboratory on a rolling road, which are converted in the UK from litres per 100km to miles per gallon.

The urban cycle test starts with a cold engine and comprises a series of accelerations, steady speeds, decelerations and idling.

Maximum speed is 31mph, average speed is 12mph and the distance covered is 2.5 miles. It is followed immediately by the extra urban cycle test, half of which comprises steady driving with the remainder being accelerations, decelerations and idling over 4.3 miles.

The combined cycle, which is taken as an indication of what a car can realistically achieve, is an average of the two parts, weighted by the distances covered in each one. Is it any wonder that most drivers struggle to reach the combined figure? Wouldn’t it be easier if manufacturers stated in small print that real fuel economy figures can go down as well as up? 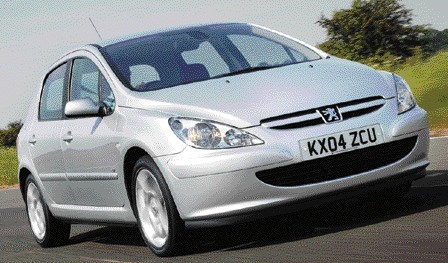 I’m not singling out Peugeot, as we have recently driven many new, supposedly frugal diesels and failed to achieve the official figure for the combined cycle. Our long-term Volvo S40, Ford Focus C-MAX and Volkswagen Passat have all been guilty.

The new engine in the Peugeot 307 achieved 57.6mpg on the combined cycle, but in our hands struggled to improve on 50mpg.

On the motorway the trip computer would creep into the 50s, but it was such a chore to try to keep it there that I worried that driving wasn’t getting my full attention. This disappointment aside, the engine gives the 307 an important boost at a critical time in its life cycle.

It comes soon after the launch of the new Volkswagen Golf, new Vauxhall Astra and the Mazda3 diesel, with the new Ford Focus and Citroen C4 on the horizon.

The 1.6-litre second generation HDi engine is apparently so versatile, it is offered in a sporty version of the Peugeot 206 as well as being the entry-level diesel in the 407 range. In the 307, it offers 110bhp and 180lb-ft – more or less on a par with the Golf 1.9 TDI, but with a more softly-spoken delivery.

Quiet around town and on the motorway, noise only really becomes intrusive approaching the 4,000rpm mark, an area of the rev counter you rarely need to go in a diesel.

The engine is responsive from about 1,500rpm, and while it might not provide the kick-in-the-backside acceleration of more expensive diesels, it is more than a match for a similar petrol engine.

The 307 doesn’t have the poise of the Ford Focus, but it copes well on challenging roads with neat handling and a supple ride.

I’m not entirely happy with the appearance of the 307 hatchback – the longer estate and SW have better proportions and next to the bolder Vauxhall Astra, it would lose a straw poll on which was the better looking.

Our SE car was well equipped, with climate control, electric windows, a dashboard-mounted five-CD autochanger, lots of airbags and other passive safety equipment. As a lower-medium diesel, it stacks up quite well overall – no disclaimer necessary.