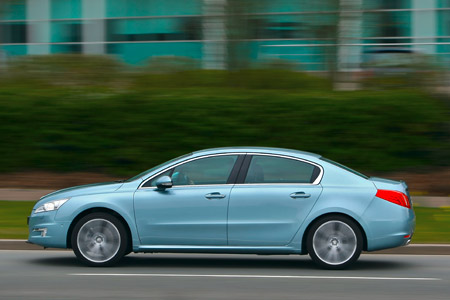 Peugeot has arguably become a pioneer when it comes to diesel-electric hybrids. While it shares technology with its sister company Citroën, it now has three cars on the market, while Citroën has just one.

The latest to join is the 508 Hybrid4 – based on the standard 508 saloon. It comes with the 2.0-litre 163bhp diesel found elsewhere in the 508 range, with additional power coming from an electric motor.

The diesel engine drives the front wheels only, while the electric motor powers the rear wheels.
Sophisticated electronics govern how both work together or alone which results in low-speed driving carried out under electric-only power (with around a couple of miles possible before the battery needs recharging from the engine).

This can also be ‘locked in’ with a dial on the centre console with the ZEV setting, which will ensure the electric motor is the only power source until the battery needs more charge.

There are three other modes: auto, sport and 4WD. Auto ensures the most efficient combination of engine and motor; sport delivers the maximum combined 200bhp available and optimises performance, while 4WD has both the engine and electric motor running simultaneously. In 4WD – which would normally be selected when maximum traction is required – the diesel engine continues to charge the battery to allow permanent running of the electric motor and ensure there is no loss of power delivery to the rear axle.

Arguably the most important results of the powertrain are CO2 emissions of 95g/km – giving the 508 Hybrid4 10% BIK tax liability and it meets the requirements for a 100% first year writing down allowance when the tougher limits come in next year – together with 78.5mpg on the combined cycle.

Both figures are remarkable for a car with a 2.0-litre diesel engine sitting under the bonnet. In the real world, anything near the 78.5mpg official figure would be difficult to achieve unless the 508 is driven around town for much of the time, allowing it to rely on the electric motor more often.

But the 508 is a car that feels most at home on the motorway. It has room for five adults to travel in comfort, and benefits from the keen responses and excellent refinement of the rest of the 508 range.
One aspect that perhaps takes getting used to is the electronic gearshifts from the sequential manual transmission. Upshifts normally feel stilted, but when the electric motor is running these are much smoother, although it is still a little hesitant in kicking down when you need to overtake.

Boot space is also compromised thanks to the hybrid technology on board – substantially less than the 473 litres provided by the standard car.