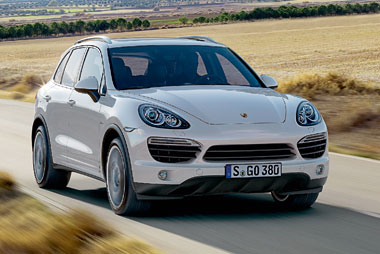 Around 15% of Porsche’s UK sales are business or fleet purchases.

The large majority of that is down to the Cayenne, which accounts for around 75% of those sales.

This all-new model is certain to continue its status as Porsche’s biggest seller, not least because with its new diesel and S Hybrid models it offers sub-200g/km CO2 emissions.

Only the Cayenne S Hybrid betters that.

With its 193g/km of CO2 emissions and non-diesel status it attracts a lower tax band than the diesel – though the higher £58,089 list price does mean annual BIK tax costs will be much the same at around £5,500 for higher-rate taxpayers.

The S Hybrid isn’t quite as fuel efficient as its diesel relative either, with the electrically assisted supercharged V6 petrol engine in the hybrid achieving a combined figure of 34.4mpg.

The Cayenne S Hybrid’s electrically assisted status is immediately apparent when you get into its smart interior.

The instruments have supplementary dials denoting the status of its electric power, while an energy flow indicator sits next to the rev-counter.

It’s possible to drive the hybrid up to 37mph using electricity alone.

Unusually, the engine also shuts down at higher speeds, with the Cayenne S Hybrid able to run without its petrol engine at up to 97mph.

The Cayenne in diesel or S Hybrid guises make a valid financial case for themselves against similar premium German opposition.

The hybrid is expensive, although the tax savings offset that.