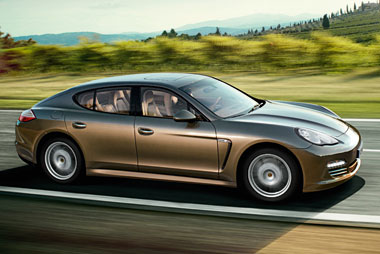 It used to be that luxury saloons were cars for people in the upper echelons of the business world to be driven in.

But it has been the case recently that mainstream motoring media, if not customers, expect them to drive as responsively as much smaller cars.

There’s an AMG-engineered version of the Mercedes-Benz S-Class, a supercharged Jaguar XJ, and Maserati – an illustrious name with a long motorsport heritage – has a presence in this sector of the market.

Another brand with considerable racing pedigree is Porsche, and the Panamera offers a four-door saloon that’s meant to be as adept at wafting VIPs to their next engagement as it is being thrashed around Thruxton on a track day.

So for companies not restricted to diesel, the Panamera is a potential option for directors.

It is strictly a four seater, although the space for two rear seat passengers is pretty generous with reasonable headroom and legroom.

However, the Panamera is probably best enjoyed from the driving seat.

Our test car was the V8 S model, that uses a 4.8-litre engine and came with the optional PDK auto transmission (a seven-speed DSG-style gearbox).

While any £80,000 car would be costly to run, the Porsche compares favourably with other saloons in this bracket, with the lure of the badge helping give the Panamera a small advantage over other luxury four-door models.

Official fuel consumption is 26.2mpg on the combined cycle, but we saw 31mpg according to the trip computer on a long, gentle run.

The Panamera will be excluded from many choice lists, but from a cost perspective it performs as well as, if not better than, other large saloons.