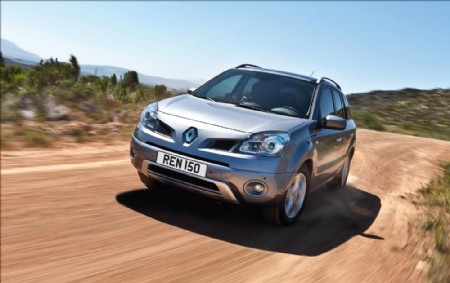 Renault hasn’t done a ‘proper’ 4x4 before, save for the Megane Scenic RX4 a few years ago.

That was described as a crossover vehicle – a cross between an MPV and a four-wheel-drive.

The new Koleos, however, is different – it’s a crossover vehicle that offers “MPV levels of comfort and genuine off-road ability”… Wait, hang on a minute.

OK, so maybe Renault has done a crossover before, but as far as the French carmaker is concerned, the RX4 didn’t count.

It placed emphasis mostly on the MPV side of things, whereas the Koleos is far more geared to off-roadness.

The Koleos marks the start of a concerted effort by Renault to branch out into the world of 4x4s, and although it says it doesn’t want to just rebadge an existing off-roader, this new vehicle shares its underpinnings with technology swiped from its partner Nissan.

The Koleos is, essentially, an X-Trail in a fancy French chapeau.

This is no bad thing, as the X-Trail has proven credentials over the rough stuff, and Renault is counting on these skills to establish its own credibility in the sector.

The Koleos comes with either full four-wheel drive or front-wheel drive, aimed at those for whom the driveway of their house is as off-road as they will ever get.

And herein lies the problem.

The Koleos has some decent off-road capability, but Renault admits that very few customers will actually use the thing beyond the school-run and motorway journeys.

This is a vehicle designed to show the world that Renault can do capable 4x4s, even if no-one will take advantage of its technology.

Of course, one could level the same observation at the likes of Range Rover et al.

Few people who own a watch capable of operating 40,000 leagues beneath the sea will ever do more than paddle with it, but it’s nice to know it can perform if you want it to.

Power comes from a choice of two 2.0-litre diesel engines, with either 148bhp or 173bhp, and three trim levels are available – Dynamique, Dynamique S and Privilege.

For £19,495 you can go for the equivalent Dynamique S, which adds ESP, some funky rear seat configuration options, automatic headlights and wipers and parking sensors.

For £20,495 you can get the four-wheel drive version, which includes hill start and hill descent control.

Renault UK’s fleet director Keith Hawes said: “Although Koleos is coming into a market full of SUVs, I’m very impressed with the interior quality and it’s very well laid out which will differentiate it from its competition.

“It will be a user-chooser perk car, but there will be practical requirements for the product from the likes of ambulances and rescue organisations requiring rapid response vehicles.

“We’ll be offering Koleos as part of the product offering to utility customers as well.

“Look at the success Nissan has had with Qashqai. Koleos is bigger and higher so it’s not beyond the realms of possibility that the 4x2 will probably do quite well.”

I can’t quite figure out the Koleos.

At the launch event, journalists were given the 4x4 dCi 175 Privilege and a route that largely consisted of rocky and gravel-covered terrain.

And, despite my reservations about the capability of crossover vehicles away from the beaten track, it was really rather good.

Skittering about on rally-style surfaces was great fun, and the car felt capable, well balanced and easily controllable.

We also had a chance to try it on a proper off-road course with big dips and climbs, and again it performed admirably.

But, most buyers of the Koleos will never take it beyond a slightly muddy field, which means that to really appeal it needs to perform on road, which it doesn’t.

The car feels soft and sluggish through the bends with too much body roll, and with even the slightest hint of spirited driving the front end seems determined to wash wide of the intended direction.

On the plus side, the build quality is as good as anything else Renault has done, the gearbox is solid and satisfying and there’s plenty of room for kids, 1,380 litres of luggage space with the back seats folded down and a further 70 litres of storage space dotted around the cabin.

It’s also competitively priced against the likes of Ford’s Kuga, Honda’s CR-V and the Volkswagen Tiguan.

This puts the Koleos in a weird place.

It’s good off road, but not as good as a Land Rover, nor, with its fairly generic Renault family face and curvy lines, does it really have the look of a rugged hillock-tackler. And on road the competitors already mentioned perform better.

Renault wants the Koleos to give it credibility in the 4x4 sector, which, thanks to Nissan’s expertise, it succeeds in doing.

But it sits oddly between the off and on road camps and doesn’t lead the pack in either arena. It excels in areas it doesn’t need to and falls down in areas where it should be better.