THE plastic key to our long-term Laguna had barely been put in my hand before the car was whisked away again.

Previous owner John Maslen had complained of a couple of niggles – a rattle in the dash and a broken CD-changer cover. So the car was picked up by Smith’s Renault, Peterborough, and returned with everything seemingly sorted.

The CD-changer cover was definitely fixed, but every now and again a mysterious buzz emanates from deep inside the dash when idling. It’s infuriatingly intermittent, so the chances of identifying it are slim unless it becomes more regular.

Once I had the Laguna back, I found the keyless entry system great – I simply keep the keycard in my wallet, and that’s it. Sensors on the doors know when I’m getting in and unlock everything, and although there’s a slot on the dash for the card, I’ve never had to use it to start the ignition.

Speaking of ignition, the start button is somewhat inconsistent in its operation. Sometimes a single push is enough and the engine roars into life. Other times it requires several pushes. Sometimes it wants me to dip the clutch, other times it doesn’t.

It’s no major inconvenience, but it can be annoying, as can the insistent beeping when you turn off the engine and get out of the car. ‘Remove card’ demands a message on the dash, even though the card was never inserted in the first place. 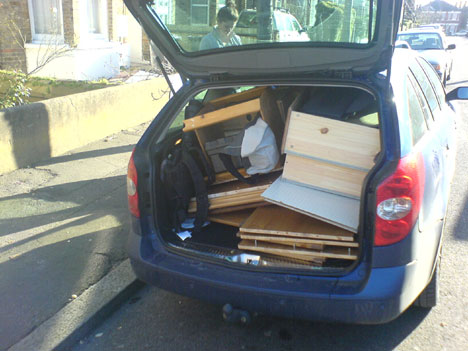 On the road, the Laguna is – well, adequate. The new 175bhp dCi engine is really good, with bags of torque and enough power for any overtaking manoeuvre. But engine aside, the car is really dull to drive. There’s nothing particularly bad about it – it corners well and the ride is pretty comfortable – but it feels utterly soulless, devoid of any drama or excitement.

Mr Maslen really liked the Laguna’s seats. I’m not as impressed – they’re comfy initially, but longer journeys have left me with a sore lower back. However, the fact the seats are heated has been a major boon recently.

I suspect it was the period of ice and snow that left me with a crack in the windscreen, probably from a stone chip that I’d missed. I called Autoglass and somebody came to fix it in the Fleet News car park the next day, and an excellent job the fitter did too. It cost an amazing £830 to replace – the typical cost for this type of heavily-laminated windscreen, fitted with rain and light sensors. Fixing chips before they turn into cracks is a lesson worth learning!

Where the Laguna has excelled is in its practicality. I moved house during January and due to a broken-down hire van I had to use the Renault to complete the lugging of stuff from Lincolnshire to Bedfordshire. With back seats folded down, I was impressed by how much the Laguna swallowed and once again the engine showed its strength, pulling the contents of my house with no problem.

It’s also a frugal lump, although I haven’t been able to match ‘Feather Foot’ Maslen’s 41mpg - I’ve been averaging 37.1mpg.