I have a friend who lives in South Wales. He’s a very good pal, but the prospect of going to see him makes me start to twitch, violently.

These involuntary pangs of fear have nothing to do with him, but more the journey needed to get there.

You see, the last time I traversed the length of the M4 a couple of years ago it was in a Renault Laguna.

I’d already been far from impressed with the car – it didn’t seem terribly well put together, and the drive was completely uninspiring.

But then, around Slough, the CD player started making terrible noises, as if it was grinding its teeth into a microphone.

And it kept doing it, all the way to Cwmbran and back. Nothing would persuade it to stop.

It sent me to the brink of insanity.

I’ve driven several examples of the outgoing Laguna, and each time something had failed to work as it should.

So, more of the same from Renault would not be good enough, especially when the new Laguna is up against the likes of Ford’s excellent Mondeo, as well as the forthcoming Mazda6 and established players such as the Honda Accord and Volkswagen Passat. This time, it has really got to get its act together.

I took delivery of the 2.0-litre dCi 150 diesel model in entry-level Expression trim, which is likely to be one of the biggest sellers in the fleet market.

First impressions are… well, not bad, but not really stunning.

There are plenty of modern, Gallic touches, even if the new front end has a touch of the mid-90s Honda Prelude to it. The partially-sunken rear lights look good, though.

Inside, things are better.

The build quality has been ratcheted up several notches, and while not up to the standard of Audi, it’s very good.

The interior looks great, with a swooping, wave-like dash that’s much more pleasing on the eye than most of the slabs one tends to see these days.

The hands-free keycard is a £150 option, but works brilliantly, and the electronic parking brake (£250) is also great.

I normally hate such devices, but this one works well in that you rarely have to actually touch it.

Turn off the engine and it engages automatically, and releases when you move away again.

If you really want to operate it manually, there’s a small push/pull button where the traditional handbrake would normally be.

The 150bhp engine is noted as being one of the best, but the power delivery on our test model seemed a bit uneven – it struggled below about 1,500rpm and seemed to take a while for the turbo to spool-up.

Higher up the rev range however, all is nice and smooth.

The gearbox feels spongy in its action, and certainly not a match for the sharper feel in the new Mondeo.

Elsewhere, the handling is surefooted and the steering is surprisingly well-weighted and tactile.

One of Renault’s trump cards is the price – the new Lagunas are on average £300 less than their equivalent predecessor.

Residual value predictions are better, which should make for more attractive leasing rates.

So, the Laguna has got cheaper, is better put together using more higher quality materials and is more enjoyable to drive. 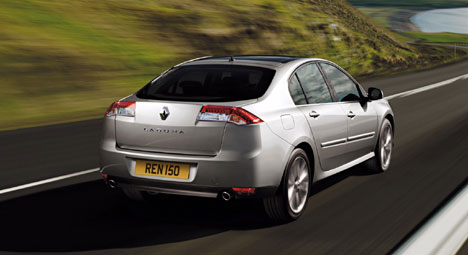