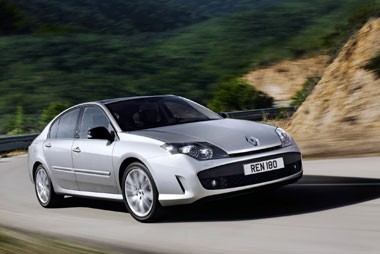 There is very little to get excited about in the new Renault Laguna.

Build quality is up and we are promised more reliable electrics, but in terms of the car and the driving experience it provides, it is adequate and nothing more.

But wait, I’m talking about the standard Laguna range, the comfortable, if undistinguished, company runabout.

This Laguna GT is something else – something much better.

From the outside, only a few subtle changes will tell the informed observer that this Laguna is a different kettle of onions.

There is the typical bevy of stylistic tweaks, such as swanky 18-inch alloys and bigger air intakes and front grille, as well as some smoked rear lights.

It’s still no looker, but the Laguna GT has more of an air of purpose about it than its less stylish siblings.

Inside, there are some excellent sports seats dressed in leather and Alcantara that do an excellent job of hugging driver and passenger without crushing their kidneys.

There are also drilled aluminium pedals, a flat-bottomed steering wheel à la Audi RS4 and a simple but stylish aluminium gearknob that’s much nicer to use than the standard, chunky Laguna shifter.

All nice little touches, but it’s the unseen mechanical stuff that sets this Laguna apart. Its pièce de résistance is four-wheel steering.

This is an idea already used on large trucks and commercial vehicles to decrease turning circles, and has been employed on Japanese cars in the ’80s and ’90s to improve cornering stability at higher speeds. Such systems were largely mechanical in their operation and received a lukewarm reception at best.

Renault’s effort is a complete reworking of the notion, which has been largely neglected in recent years thanks to the advent of Electronic Stability Control.

At less than 38mph, the rear wheels turn in the opposite direction to the fronts, reducing the turning circle, while at high speeds they steer in the same direction to counter under-steer.

This has considerable safety benefits, but also makes for a car that handles fantastically. Turn in is quick and crisp and you’d have to properly hurl the wheel around to make the GT feel unsettled.

The throttle response is quick and sharp, and combines with a decent six-speed manual gearbox to further improve the on-road experience.

If I was being picky I’d say the ride is a little on the crashy side and the car’s build quality, while vastly improved over Renaults of yore, is still below that of the market leaders. But neither quibble is much of a problem.

The GT is, unlike the rest of the Laguna range, fun. But it doesn’t sacrifice practicality, and in diesel form manages to be entertaining without gulping down fuel at wallet-frying pace.

The Laguna trumps all on price, and boasts the most power with 180bhp and a decent equipment level. The rest are all specified very well and close to each other in terms of power. (C5 173bhp, Passat 170bhp, Mondeo 175bhp), though the Ford costs almost £3,000 more.

The Volkswagen is the least emitting and sneaks into a tax band below the Ford. It costs £84 a month in company car tax for a 20% taxpayer while the Ford is £99 because of its much higher price. Both French cars fall into the same tax band, the Renault at £87 and the Citroen £88.

Almost nothing separates the Ford and the Volkswagen over a three-year/60,000-mile fleet life. The Focus’s 15-inch tyres keep its costs down, as does the Golf’s variable service interval. The Renault has a rather small 12,000-mile service interval, while the C5’s lower-profile tyres bump up its costs.

Thanks to a combined fuel economy of 46.3mpg, the Volkswagen is the cheapest car to fuel over 60,000 miles. Close behind is the Mondeo, which returns 45.6mpg. The two French cars lag a little behind. The Citroën makes 43.5mpg and the Renault 43.4mpg.

The Passat has the strongest residual value at 38% after three years/ 60,000 miles, according to CAP. But the Citroën, at 37%, loses the least money. The Renault has a 32% RV and the Ford is way behind with 30%, losing more than £4,000 more than the Citroën over the same time.

It’s a close-run thing over three years/60,000 miles. The Volkswagen just shades it thanks to a strong RV and good fuel economy, but the Citroën is close behind. The Laguna is defeated by its economy and servicing costs, and the Mondeo’s high price and low RV put it last.

The Renault and Mondeo can’t compete in this high-powered diesel arena, costing far more to run than their rivals over a three-year/60,000-mile fleet life. The Volkswagen Passat is the cheapest to run, with very strong residuals, best fuel economy and lowest company car tax.

However, it is the oldest and is coming towards the end of its shelf life. The Citroën costs less than £300 more over three years/60,000 miles and is brand new. If drivers are willing to pay a bit extra in company car tax and VED, they will find the C5 a more modern, stylish and rewarding car that won’t deter fleet managers.