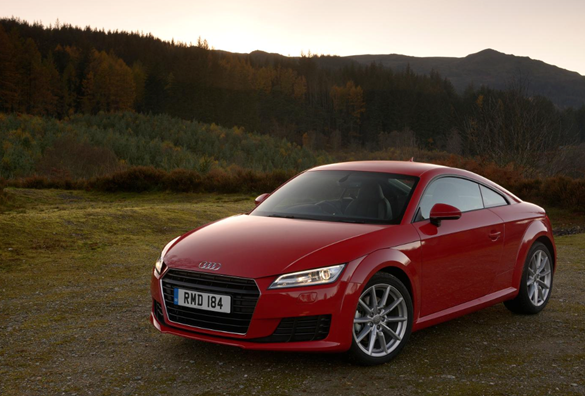 The sporty Audi TT coupé isn’t an obvious company car, and it won’t make it on to the choice lists of job-need fleets that stipulate five doors, but it has a surprising number of corporate sales.

Last year, the manufacturer sold around 2,500 TTs, with nearly a third (31%) going to fleets. Of those fleet sales, around 85% were coupés and 15% were roadsters.

As a perk car, the coupé is an attractive choice with the third generation’s more aggressive styling designed to appeal to male drivers (although it’s arguably equally appealing to women).

Financially, the 2.0-litre TDI Ultra that we tested – the most efficient TT coupé – sits in the 21% benefit-in-kind (BIK) bracket (including the 3% diesel supplement) with CO2 emissions well below the 130g/km limit many companies impose. It emits 116g/km – just 1g/km higher than other diesel rivals (see column) and a 16% reduction over the previous model. Efficiency has improved by 17.5% with a combined fuel economy of 62.8mpg (up from 53.3mpg). During our week with the TT we averaged a reasonable 52mpg, based mainly on short urban trips with one 100-mile round trip.

On the road, the TT’s firm suspension matches its sporty looks but it’s not an uncomfortable ride and acceleration is a brisk 0-62mph in seven seconds.

Its light steering means parking and manoeuvring can be handled with ease (although our S Line model came equipped with Audi’s parking system plus, with park assist, for £640).

The biggest change behind the wheel is Audi’s new virtual cockpit, which replaces the traditional instrument cluster. It is based around a 12.3-inch, high resolution LCD display that fills the driver’s instrument binnacle.

Drivers can choose between two display modes: ‘classic’ (with the speedometer and rev counter in the foreground) and ‘infotainment’ (with smaller virtual instruments, allowing more room for other functions such as the sat-nav map). The displays for the outside temperature, time and mileage are permanently visible.

The virtual cockpit has divided opinion with critics, who say that it focuses too much on the driver as the passenger is not able to see the sat-nav and media system. However, I appreciated being able to quickly glance down at the sat-nav while driving.

S Line specification includes 19-inch alloy wheels, all-weather LED headlights, which give optimum visibility in varying conditions, and the option of S Line sports suspension (which reduces the ride height by 10mm, at no extra cost).

Available safety technology includes Audi side assist (which uses rear-mounted radar sensors to help the driver change lanes more safely), a camera-based traffic sign recognition, the Audi pre sense basic safety system (which takes protective action such as closing the windows and tensioning the seatbelts if sensors detect an impending collision) and Audi active lane assist, which corrects the steering or warns the driver if there is a danger of unintentionally drifting out of the lane.

However, an autonomous emergency braking system is not yet available on the TT.

Audi is keen to suggest that the TT is “a sports car for everyday use” and the boot is a reasonable 305 litres (13 litres more than before). It can be increased to 712 by folding the rear seat backrests forwards.

However, like the old TT, the rear seats are only really suitable for children.

This car has an important role in paving the way for the launch of the much-anticipated XE next year which, as a rival to the BMW 3 Series, sits squarely in the corporate user-chooser heartland.