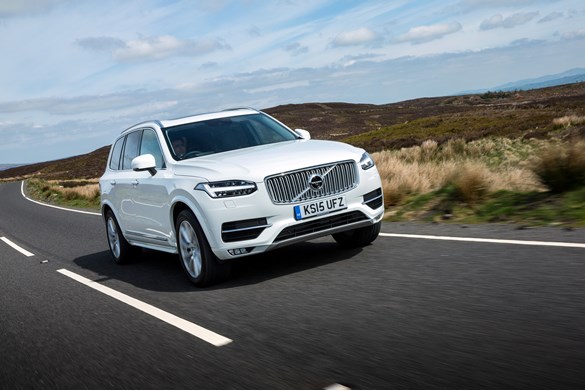 Volvo created a new SUV template with the launch of the first generation XC90 in 2002, with its seven-seat versatility and focus on minimising emissions.

The company hopes the latest version, launched earlier this year, will do the same – this time for safety. The car achieved top ratings as it was awarded five stars in the Euro NCAP tests.

It showcases a range of Volvo safety innovations, much of it as standard, including a collapsible mechanism in the front seat bases that helps protect against spine injuries and run off road protection which restrains the driver if the car leaves the road. It also has autonomous emergency braking, while a £1,500 Intellisafe Pro pack adds adaptive cruise control, queue assist, rear collision mitigation, lane keeping and blind spot warning with cross traffic alert.

Our week-long test with the XC90 revealed a large SUV that was effortless to drive. Well-weighted electric power steering was precise and gave the impression of a much lighter car, particularly around town.

On the practicality front, the rearmost seats were simplicity itself with their one-pull action to raise and lower with the head restraints popping automatically into place.

Every passenger enjoyed ample leg, arm and head room, leaving reasonable boot space (314 litres) when all the seats were occupied (1,868 with rear seats down).

Running costs are competitive – ahead of comparable Audi Q7 and Mercedes-Benz M-Class, but behind the BMW X5 (due to superior residual values and lower service, maintenance and repair costs).

It amounts to an additional £3,000 over four years, compared to the X5, although the XC90 is better equipped and its rear seats are far more spacious than the cramped offering from BMW.
Overall, the experience was very positive, but I did encounter some negatives.

Halfway through the week, a fault flashed up on the dashboard claiming a security system failure requiring an immediate service. It didn’t, but it was an unwanted concern.

A Volvo spokesperson played down the issue: “On the warning message, we’ve had it on two cars, but bearing in mind we currently have about 350 on our various fleets, it’s definitely not a common problem.”

In addition, the crash alert system was a little too sensitive. In one instance it was triggered (with a dramatic bright red flashing light and audible alarm) when passing a line of parked cars as an oncoming car approached with ample space – and therefore no danger – between the two.

On another occasion it took exception to a parked car on the cusp of a bendy residential street and – briefly - activated the brakes. Was it my fault? I was travelling well within the 30mph speed limit, so I don’t think so.

Small bugbears, though, compared to the massive potential benefits of having such safety systems fitted.

Volvo took the Fleet News large SUV of the year title at the 2015 Awards, with the smaller XC60. With the safety advances, additional space and other technological innovations of the XC90, not to mention competitive running costs, Volvo has another potential winner on its hands.