SAAB is on a roll. Sales are going through the roof (it has just set a record in the UK, topping 20,500 registrations), the marque is getting on to more fleet choice lists and its range is gradually being updated.

The latest addition to the line up is the 9-3 SportWagon, an estate version of the well-received saloon version which is set to battle against the likes of Audi’s A4 Avant and BMW’s new 3-series Touring.

From head-on there’s nothing to distinguish the SportWagon from the saloon, and so it continues to the rear doors. It’s only aft of here that there is any difference, with a big estate body grafted seamlessly on.

The only controversial aspect is the clear glass lenses for the rear lights. They looked stunning on the concept car, but in reality, on a grey morning and matched to a silver-coloured body, they don’t stand out as much as the design feature they were intended to be.

The large rear tailgate opens wide to reveal a low loading sill, which makes lifting items into the boot less of a hassle.

The only downside is the carrying capacity. With the rear seats in place, the Saab offers 419 litres of space, compared with 442 for the Audi, 455 for the Jaguar and 460 for the BMW.

With the rear seats folded flat, the cars offer 1,273, 1,184, 1,415 and 1,385 litres respectively. Although these cars are marketed more as lifestyle estates than load luggers, the Saab falls short of its rivals.

However, it does offer a ‘TwinFloor’ stowage system. By opening the aircraft-shaped handle (which harks back to its Viggen jet plane-making division) in the boot floor, it reveals another load area to increase luggage capacity.

The driving experience is exactly as you find in the saloon, with a strong 150bhp turbodiesel engine which sees service in the 9-3 saloon and several Vauxhall models.

This engine has an excess of power in the mid-range, making overtaking an effortless business. On winding country roads you don’t need to go below third gear, such is this engine’s reserves. 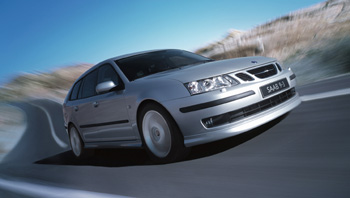 Only the gearbox spoils the fun. It has a notchy feel which restricts quick gearchanges and spoils this car’s sporting nature. But this is no surprise, as it does exactly the same thing in the saloon. Other than that, it’s pure Saab, which means an oversize steering wheel, the ignition barrel located behind the handbrake and the aircraft-style dashboard.

The SportWagon is sure to drive Saab’s sales ever further upwards, and the new model is a strong addition to the line-up. It matches its rivals in all areas, except one – the BMW 320d Touring.

BMW’s 3-series Touring remains a far better sporting estate. It’s easily the best of the bunch for driver enjoyment and it has the badge which most drivers still covet.