AFTER the trauma suffered by our previous 9-3 at the hands of a lorry (Fleet NewsNet, February 16), I’ve been careful to give our articulated friends a very wide berth. But that’s not to say life at the wheel of the replacement Saab has been drama-free…

On a recent drive along a winding country road with high-banked sides, the 9-3 was able to show off the benefits of its comprehensive package of dynamic and passive safety aids when, on a blind bend, I suddenly came across a car that had just seconds before suffered a tyre blow-out, swerved and then partially blocked the road.

Although the incident was over in a matter of seconds, the situation seemed to play itself out in agonisingly slow motion.

Crucially though, being able to just plant the middle pedal hard down and leave all braking modulation and stability issues to the ABS and ESP systems left me to concentrate on guiding the Saab around the stricken hatchback. What really impressed was how drama-free the 9-3 made it all seem.

By way of a contrast to that excitement, the 9-3 has calmly notched up a further 2,000 miles in the few weeks since my last report. And despite some punishing treatment, it continues with its parsimonious ways at the fuel pumps. A low of 41mpg was unusual – more typically, the mid to high forties is good news now that diesel is already at £1 per litre in some parts of the country.

My introduction to our 9-3, which involved a quick once-over, then a blast to Scotland, left me with little time to give it a thorough going-over, but subsequent tyre-kicking sessions and repeated poking and prodding have shown nothing that warrants a major rant.

Mechanically, the 16-valve TiD engine’s 2,000rpm rough spot continues to be a minor source of aural irritation (it’s more of a pronounced ‘thrumming’ than a latent mechanical roughness as such). I’ve come to the conclusion that it is nothing more than the point at which the engine produces its maximum torque output.

Inside, the quality and feel of the materials is, in general terms, top drawer so no problem there, but detailing such as exposed seatbelt mountings and the stylised handbrake lever that doesn’t quite align with the centre console when in its lowered position (see picture above) would never be condoned in an Audi A4 or BMW 3-series.

I enjoy driving the 9-3; dynamically it’s a great car that is let down by some of its detailing. And that’s a shame.

But as the saying goes: ‘The devil is in the detail’. 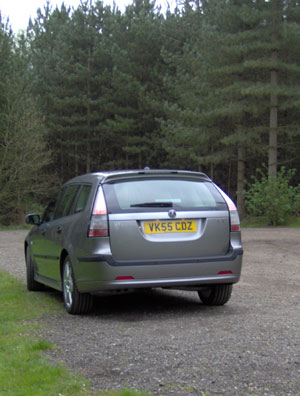