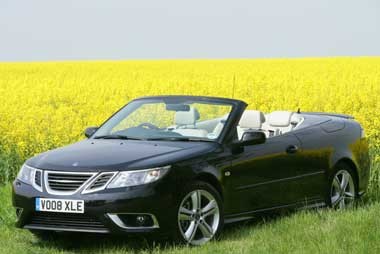 You just can’t please some people.

In my first report on the 9-3 Convertible I moaned about the bad weather and how I hadn’t had the opportunity to get the roof down much.

Over the past couple of weeks, in wonderful weather, I’ve done nearly 1,000 miles snuggled under the fabric.

Why? Well, with diesel costing more than £1.30 a litre I’ve been driving around with the roof up even if the sun’s out.

Reasoning that if having the windows open on a car hurts fuel consumption because of extra drag, having a great big hole where the roof used to be must be akin to tying an elephant to the boot in terms of efficiency.

As a result, I’ve been sneaking the fuel economy up towards 50mpg which, even if I say so myself, I’m pretty pleased about.

Getting the Saab into sixth gear as quickly as possible helps as well, although you’ve got to be careful you don’t get into too high a gear too early because this is probably the easiest way to stall every diesel I have ever driven.

The problem is a snatchy clutch and the way the engine seems to bog down at low revs – get caught at low speed in second gear and you cannot rely on the engine alone to pull you as you might in most diesels.

It needs some revs on it.

The figures suggest there are fistfuls of torque at low speed as well, so quite why it should be so argumentative I don’t know.

Other than that, the 9-3 is performing very well.

I’m a massive fan of the Saab’s touch screen navigation and entertainment system, which is logical and simple to use, albeit at a cost of nearly £1,800.

Programming in a destination is as easy and quick as it could be, while you are given choices for types of routes, and the choice to reroute around trouble.

It lists radio stations by type, has an auxiliary jack for an iPod, speed adapting volume and very good sound quality, both of which are especially useful in a soft-top.

I’ve only a couple of points to make about its foibles.

There’s no long wave for those who like to listen to the shipping forecast or Test Match Special, while the system’s ability to use traffic messaging to show problems ahead is considerably superior to whatever data Saab is being supplied with.

The number of times I’ve been offered an alternative longer route but carried on and found no problem is already into double figures.

But on the whole it is excellent, and a genuinely good tool for long-distance driving.

It should be of real use for the Saab’s next big test – driving to the south of France.

As it’s a holiday, I might even treat myself and get the roof down on the trip.