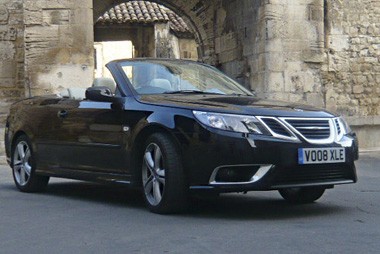 I have a friend who is so scared of flying that he couldn’t get on the plane for his honeymoon a few years ago.

As a result, for my holiday this year, he, his new girlfriend, my wife and I ended up driving to the south of France in the Saab 9-3 Convertible.

At first glance, four adults and all their luggage in a convertible for a day and 800 miles looked a claustrophobe’s worst nightmare.

And the boot seems hardly commodious.

But you’d be surprised. I decreed that luggage could be carried only in bin bags, thus maximising every nook and cranny, and it’s actually rather surprising just how much you can get in when the roof is up.

We managed all our kit easily, although I avoided my wife’s eye as she muttered darkly about the shoes and clothes that I had previously ordered be left behind.

As for space in the back, it certainly is snug and there isn’t much chance to stretch your legs.

In fact, you can barely get your feet under the seats in front.

But it was lovely and comfortable in the driving seat, thanks very much.

On the trip a number of things became apparent: there are nearly three times as many Norbert Dentressangle trucks on French roads as there are Willi Betz and what the French think is a traffic jam wouldn’t pass for a light smattering on our roads.

The traffic information system in the car annoyingly tried to re-route us away from warned trouble probably every 30 minutes on average, which we ended up ignoring as we found that there was often no trouble.

Other than that, the infotainment system performed well: the sat-nav was very accurate while the iPod adaptor proved a godsend.

On the journey down, with four adults and all our kit at a steady 85mph, we managed 35mpg, which I was impressed with.

The Saab is a superb long distance cruiser, with the 180bhp diesel engine now nicely run-in and performing very smoothly.

So while the Saab performed well on the way down, it proved
to be spectacular on the rest of the holiday.

With the roof down you could really appreciate the warming sun and vine strewn countryside of Provence.

The highlight was sweeping to the top of Mont Ventoux along jinking lanes, passing red-faced cyclists emulating, very slowly, the Tour de France cyclists of a few weeks before.

Coming back down the other side we found wide empty roads where the 9-3’s handling, which is considerably better than many would claim, really came into its own.

So all in all, the car proved a triumph on the long journey there and back, and on the gorgeous little trips in between, while there was no issue about boot space and not too many ‘arrêtes’ for diesel either.