NEW diesel engines should soon be playing a vital role in helping Saab drive away from its position as an also-ran in Britain’s premium car market.

After six years of declining registrations, the Swedish company claims it is poised for a period of dramatic growth as the sales gap on its rivals is narrowed with a choice of advanced turbodiesel power for the 9-3 Sport Saloon range.

Backed by revised specification and upgrades to enhance trim levels, 2005 model year examples of the firm’s most popular cars are being pitched to woo BMW buyers as well as tempting customers away from the Passat and Mondeo – and the Vectra from fellow GM brand Vauxhall.

Saab Great Britain managing director Jonathan Nash said: ‘After selling almost 20,000 cars in 1998, our volumes have fallen consistently because we have failed to keep pace with our competitors. We have lagged behind in a number of ways, but diesel is one of the key areas where it is clear we have not been competitive.

‘The time has now come to put that right.’

Speaking as the revised range was being launched to the media in Germany, Nash said Saab’s UK operation had done well to achieve a 2% increase in sales so far this year against a 3.8% decline in premium car registrations.

He said: ‘We have managed this performance thanks to many improvements, but diesel has yet to become a factor in the increase. Our new 1.9-litre TiD powertrain option will provide us with a lot more potential.

‘We are ready for a major expansion and I’m confident of reaching a sales total of 25,000 units next year – a result that we will find particularly satisfying because it means we finally get to achieve 10% of the premium sector and a 1% share of the total UK market.’

But he said the 1.9-litre replacement units, offering a choice of 120bhp and 150bhp, complied with Euro IV emissions regulations as well as providing greater performance and improved economy.

He said: ‘The 150bhp version produces more power with 10% better economy and comes with optional six-speed automatic transmission, a first in the segment. Our entry-level unit is ahead of most of the competition in terms of refinement, power delivery and smoothness but has up to 12% better economy.

‘This shows that Saab now has state-of-the-art technology under the bonnet.’ 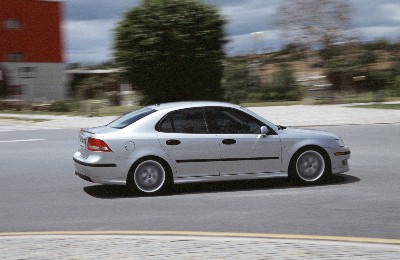 The JTD 1.9-litre unit is supplied by GM Fiat Powertrain and the top version develops 10bhp more than it does in Multijet form as used by Alfa Romeo, largely due to the fitment of Saab’s own engine management system.

Like the 120bhp version, it is fitted with a particulate filter system that is maintenance-free.

Also introduced for the 9-3 are new Sport variants aimed at meeting demand for extra equipment at keen cost. Called Linear Sport and Vector Sport, the models are available with all engine options apart from the 210bhp 2.0 HOT Aero. Wood-trimmed Arc models have been dropped from the range.

At £650 more than the standard 9-3 Vector, the Sport pack provides electronic stability control, a higher level of computer information and entertainment system and 17-inch alloy wheels.

Nash said: ‘We were obviously not competitive with our old diesel engine. Its £153 monthly tax liability put us at a severe disadvantage and as a result, we lost out heavily to the BMW 3-series, which allowed 40% taxpayers to pay monthly BIK payments of £50 less.

‘We make no apologies for targeting the ES, which was introduced by BMW as a limited-edition package that became so popular that it is now a full-line model and the mainstay of the range. We’ve gone for the best-selling car in the sector and are confident of success because we are now able to claim stronger performance.

‘It is no coincidence that the on-road price is the same, the tax band is the same and the tax position is the same – and the driver gets the bonus of £1,500-worth of equipment for free.

‘Our research has shown that potential customers like the looks of the 120bhp Vector Sport and appreciate its styling kit, fancy wheels and body-hugging seats.

‘I believe it will soon become our most popular car. That’s what we intend and that is what it has been designed to be. As we’re the last to drive into the market, we can’t afford to hang about and we don’t intend to.’

GM’s alliance with Fiat has yet to make its full impact on the partners’ model ranges, but the signs are particularly encouraging for Saab.

In 125bhp 2.2-litre turbodiesel form, a high CO2 figure left its 9-3 Linear and Vector models outclassed by all rivals, but the new choice of output, linked with competitive emissions results and greatly reduced BIK liability, are set to allow the Swedish firm to stage a comeback in the company car market.

Solidity and safe handling have always been key attributes of the 9-3 and the latest versions continue the tradition. With either version under the bonnet, the car now has vigorous performance and both engines come with a slick-change, close-ratio six-speed manual gearbox as standard.

No price is yet available for the six-speed auto transmission, which is available toward the end of the year, but it is well mated to the extra oomph of the 150bhp version and provides impressively smooth shifts to go with the surging power.

But both the cars I drove had serious refinement failings in the highly subjective area concerning noise, vibration and harshness. While each proved reasonably subdued during light-throttle cruising, an unacceptably harsh sound accompanied acceleration at any speed. To make matters worse, both units produce a distinctly ‘clackety’ sound on idle.

According to Saab, the cars I drove were prototypes that had not been fitted with the correct sound-deadening materials.

Saab is late to the diesel party but these applications of the excellent JTD technology should help the company make up lost ground – provided production models are more muted.