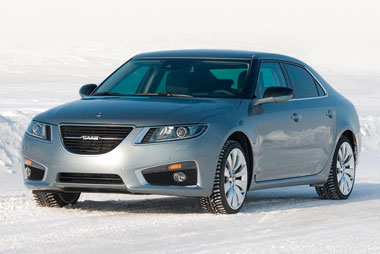 With its aviation history, Saab should be able to cope with turbulence better than most.
It proved that in February, with Saab pulling out of what looked like a terminal tailspin and coming up with a credible business rescue plan.

With its parent company GM looking to off-load it, Saab was in serious trouble.

A Koenigsegg deal came and went, before Dutch sportscar firm Spyker came to the rescue to bail out GM’s troubled Swedish patient.

With financial parachutes from the banks, a solid business plan and, crucially, a new model developed and paid for by GM waiting in the wings, Saab is back.

There’s confidence at Saab and it’s based on this new car, the 9-5. A competitor in the premium upper segment, the new 9-5 rivals the BMW 5 Series, Mercedes-Benz E-Class and Audi’s A6. To that you can add Volvo’s S80, though Saab admits it’s aiming its new executive firmly at the Audi.

Saab UK head of fleet Paul Adler said: “The 9-5 will re-establish us, from a brand perspective.”

He’s confident the 9-5 is the product to push Saab back into the fleet market.

Naturally the numbers to begin with look modest, Adler admitting that about a third of the 1,500 9-5 sales Saab expects this year will be to fleets.

The introduction of the 9-5 estate in 2011 will bolster that significantly, as will the introduction of a heavily revised 9-3 model, with powertrain enhancements improving its competitiveness in the fleet marketplace.

Saab’s ownership woes have inevitably impacted on the company’s desirability to leasing companies, but many of those that dropped the brand have since returned to offer its products.

While there are still some questions about stable residuals, Saab is confident that its new product and business plan are enough to convince the market, Adler admitting that Saab needs to “earn the right to be in the fleet business”.

The new 9-5 spearheads that push, and it looks like a desirable proposition.

That’s particularly true of the 158bhp 2.0-litre TiD turbodiesel, which in six-speed manual guise delivers a combined fuel consumption figure of 53.2mpg and a CO2 output of just
139g/km.

Those numbers match Audi’s A6 2.0TDIe, though the Saab offers greater power and performance, while standard specification levels interior space are more generous.

At more than five metres in length the 9-5 is the longest in its class.

That’s to the benefit of space, particularly in the rear where leg and headroom is excellent.

Inside, the 9-5’s cabin doesn’t quite exhibit the depth of quality of the Audi, though Saab’s usual quirks like the push-button start location on the transmission tunnel, tactile air-vent controls and the brilliant instrument-dimming ‘Nightpanel’ button do lift the interior above the mere ordinary.

On the road the Saab drives exactly how you’d expect it to, with a focus on comfort.

That’s largely achieved; the refinement is good, though the suspension does sometimes deliver the odd knock on poorer surfaces.

The 2.0-litre turbodiesel is punchy, though the six-speed manual gearbox has a particularly long throw and its ratios are clearly spaced for economy rather than performance.

Saab recognises that the 9-5 will appeal to a different kind of buyer, the type that the previous 9-5 lost over its 13-year run.

Its goal is to win those customers back, and more to boot. Some turbulence inevitably remains, but if the 9-5 is an indication of Saab’s new direction then it should be taken very seriously indeed.