IF pop psychology is to be believed, there comes a point in many people’s lives when the need to finally succumb to buying a mini-MPV overwhelms them and they duly sign on the dotted line, buying in to a big box on wheels and selling out a life of independence and youth.

I’ve spoken to plenty of people who have endured this middle-aged metamorphosis, and it appears to be not a butterfly that emerges from their new cocoon-shaped car. It’s a harassed parent with burdens and big bills.

So SEAT would like its new Altea to be seen as some sort of halfway house for those who find the transition too painful to bear in one fell swoop. It’s a kind of nicotine patch for drivers.

It looks like an MPV – albeit a rather swanky one – but actually has about as much practicality as a decently sorted lower-medium hatch. SEAT has given it the moniker of ‘multi-sports vehicle’ but that’s a bit like calling a spade an ‘activity load blade’. So in the interests of calling a spade a spade, the Altea is a mini-MPV – and by far the best-looking one on the market.

We tested the 1.9 TDI engine with 105bhp and, as it’s an engine that gets everywhere, there are no surprises. What you get is a slightly coarse unit with strong performance, as usual for a Volkswagen Group car, alongside other trademark features such as electro-mechanical power steering that renders the steering easy but devoid of feel and over-servoed brakes.

The Altea drives well and would certainly give the Ford Focus C-MAX a run for its money. It feels positive and well set-up – the ride is on the firm side without being uncomfortable and SEAT has done a good job of containing body roll.

Internally, the Altea’s posture has many of the usual MPV attributes without real benefits.

That means the seating position is high and comfortable and there’s plenty of typically useless headroom.

Pillars each side of the windscreen obstruct the view, as with most MPVs, but where are all the useful storage areas that buyers of MPVs like?

The quality inside is pretty good though and the dash’s various swoops and textures do a good job of filling the blank plastic desert that usually dominates the front of cars of these proportions.

The Stylance model featured here, silly name apart, has plenty of kit for its price, with climate and cruise control, CD player and alloy wheels. 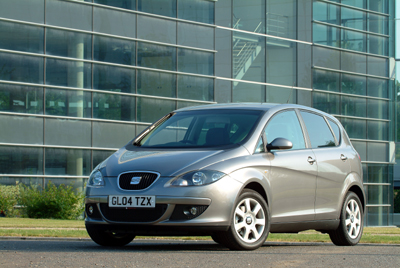 The fact that the seats in the back only fold down and don’t come out takes away some of the advantages a car of this size should have. There isn’t even that much room in the back.

With the seats down, there are 1,320 litres of space, which is a similar volume to a lifestyle estate like the Audi A4 or BMW 3-series, but in many ways the statistics are misleading. This is packed to the rafters space, but unless you taking a child to university, transporting a load of hedge cuttings to the dump or transporting a particularly large number of bean bags somewhere, how often does 50% of that volume get used?

In the end, the Altea is neither here nor there, which could cause some prospective buyers problems.

But like many consumer products in life, such as reality TV contestants, mobile phones and high-heeled shoes, its good looks should overcome many of its practical shortcomings.