With eight pounds in every 10 spent in their stores, Tesco’s message that ‘Every little helps’ certainly seems to be getting through to the cost-conscious masses.

And SEAT has obviously decided that the same sentiment should be applied to its Altea mini-MPV.

This model has always been under-endowed when it comes to offering the key mini-MPV benefit of space, so it has launched the Altea XL, in which you get an extra 18.7cm in length, more head and legroom and more than 100 litres of extra boot space.

At first glance, it could be the regular Altea, but look more closely at the rear and you spot the tell-tale differences. 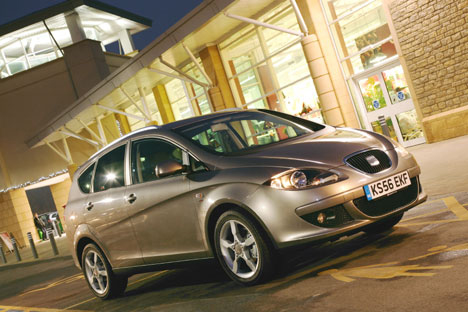 Firstly, there are split tail lights aimed at giving an upmarket feel, while open the rear hatch and there’s a noticeably larger boot than in the standard Altea – up from 409 litres to 532 with the rear seats in place and 1,604 with the seats folded down, compared to 1,320 in the regular model.

While the gains over its smaller brother are evident, the XL is still outclassed by the Ford C-MAX, which offers 550 litres of luggage room, or 1,620 with the seats folded down.

None can match the Renault in outright carrying capacity, though, with the Scenic offering 1,840 litres.

However, in terms of useable space the Altea XL is excellent, with a flat loadbay, although there is a ledge that you have to drop items over rather than sliding them straight in.

There are nice little touches, such as a tray on the back of the front seats which also have a hook to hang bags on so they don’t roll around the floor. To add more space, standard roof-rails allow an extra 75kg to be carried up top, although extra luggage might impact on the 52.3mpg claimed average fuel economy figure.

From the driver’s seat, the red-lit instrument panel lifts an otherwise plain outlook, with quality grey plastic the order of the day, apart from a splash of silver backing on the centre console.

On the downside, the cup holders are hidden under the dashboard, which makes them hard to access.

Road noise is well-suppressed and the car corners well, with nicely-weighted steering and a minimum of tyre scrabble under hard acceleration. Progress is swift and the 105bhp unit pulls strongly all the way to its redline, rather than suffering from torque peaks like some rival diesels.

All this comes at just £500 more than the standard Altea – and there seem to be few penalties for the driver, while the fleet manager gets better RVs, with CAP estimating 34% retained value for the XL against 33% for the standard model.

Overall, for a little extra you get quite a lot in terms of equipment, space and increased flexibility. Which begs the question – why wasn’t the Altea designed as an XL from the outset?