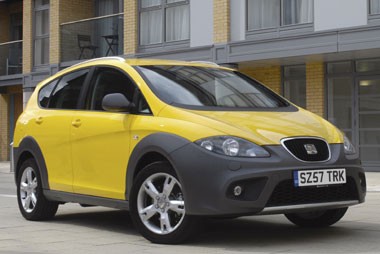 In line with just about every other car manufacturer in the world, SEAT wants a slice of the small SUV market sector.

However, its challenge to the likes of Honda’s CR-V and the Land Rover Freelander is still some way away from the showrooms, so for the time being it is offering the Freetrack 4 – a sort of halfway house between regular family car and off-roader.

It is essentially a jacked-up and body-clad version of the Altea XL multi-activity vehicle.

It is available in two versions – 200bhp petrol or 170bhp diesel – using parent company Volkswagen’s four-wheel drive hardware which means that in normal road driving power is transmitted to the front wheels.

Only when more traction is required is the rear axle called in to play.

It’s a system that works well, giving some off-road ability, although severe mud-plugging is hampered by the car’s lack of ground clearance.

But at least it looks the part.

The ride height is raised over the stock Altea and there is plenty of plastic body cladding applied to the front and wheelarches.

This gives a more muscular look and embodies the Freetrack with some of the all-important SUV chunkiness.

But this is not a proper SUV, so its appeal will always be slightly limited.

What the Freetrack does offer is a strong family car package.

Priced at under £21,500 for the diesel version on test here, the SEAT comes loaded with equipment which should appeal to family buyers and those with a ‘lifestyle’ disposition.

But the Freetrack’s USP is its in-built entertainment system with its seven-inch colour screen which drops from the roof and allows rear seat passengers the chance to watch DVDs or play computer games.

Up front, the cockpit is very similar to any other SEAT model, which means a logical layout and a fair smattering of Volkswagen Group switchgear.

On the road the 170bhp 2.0-litre TDI engine offers strong performance, with plenty of low-down torque for easy overtaking.

The six-speed gearbox shifts cleanly and the ride is not too compromised by the raised ride height.

And there’s plenty of room inside for a family of four.

The Freetrack will ultimately not be able to mount a challenge to the established players in the sector because it falls between two camps.

It isn’t a proper SUV but viewed as something different from the norm in the family car sector and it scores well.