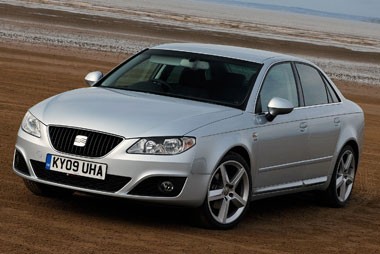 While Seat’s Exeo will not threaten the dominance of the upper-medium sector’s big players such as Ford and Vauxhall, it should make a shrewd fleet manager sit up and take notice.

For the idea of being able to offer Audi style and quality with Seat price, running costs and high equipment levels should be an intoxicating one – and it is something the Exeo successfully combines.

More than just staging a small raid on the Volkswagen Group’s parts bin, the Spanish manufacturer has launched a Brinks Mat-scale heist as the Exeo boasts the same chassis as the previous-generation A4.

It also shares its familiar smooth shape with the Audi – but given the Seat treatment with new front and rear ends – while under the bonnet of our SE test model is the Volkswagen Group’s familiar 2.0 TDI common rail diesel engine.

CO2 emissions of 143g/km put the Exeo in the 19% benefit-in-kind tax bracket, while it returns a claimed 51.4mpg on the combined cycle – a realistic figure as during our week-long test we achieved around 49mpg in a range of conditions.

As you would expect given its Audi heritage, the Exeo’s build quality is excellent and the interior design still feels modern and fresh – the architecture is based on the A4 Cabriolet.

Front-seat occupants have plenty of space, but it lacks the cavernous rear passenger room of sector leaders such as the Vauxhall Insignia and Ford Mondeo.

Boot space is a more than adequate 460 litres.

On the road it impresses, too, with the 2.0 TDI engine providing plenty of power and refinement.

Ride and handling are impressive, reflecting Seat’s sporting image without ever erring on the harsh side of firm.

The overwhelming feeling is one of quality – giving a premium car experience without the premium price tag.

The Exeo has an important role to play in the brand’s ambitions of becoming a bigger player in the fleet market, as out of the 2,000 it expects to sell by April next year, 75% are expected to go into fleets.

Seat has recently made a couple of appointments to its fleet team and the Exeo’s launch now allows it to go to a company and offer a car from its model range for all grades of staff.