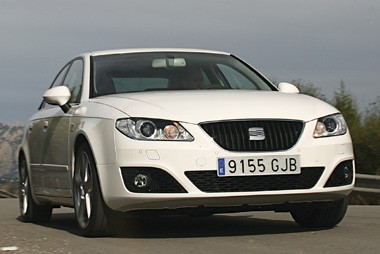 There are two ways of looking at the new SEAT Exeo.

One train of thought is that it is a cynical badge-engineering exercise that takes platform sharing within the Volkswagen Group to a whole new level.

The counter opinion is that it is sensible business practice for the Spanish firm.

Whatever your thoughts, the Exeo is coming and will go on sale in the UK next April.

It takes the previous generation Audi A4 as its starting point, but features redesigned front and rear ends to make it more on-message for the Spanish company’s design language.

Inside, the entire cabin is lifted from the A4 Cabriolet.

And in terms of mechanicals it is all familiar Volkswagen Group technology.

However, unlike the old A4, the Exeo runs with a choice of two new common rail TDI turbodiesel engines, offering 143bhp and 168bhp.

A turbocharged 197bhp 2.0-litre FSI petrol from the Golf GTI will also be offered.

The suspension and steering set-ups have also been altered.

When it goes on sale next spring, SEAT will be targeting user-choosers and small business operators with the Exeo.

It expects 75% of registrations to be in the fleet sector and hopes that competitive pricing (estimated at between £17,000 and £21,000) and high equipment levels, plus the inherited build quality from the car’s Audi underpinnings, will make it a sound business proposition.

The Exeo will also help to plug a gaping hole in SEAT’s product line-up.

Even though the upper-medium segment is declining, it is still the third largest market for car sales and will enable SEAT’s fleet team to go to a company and offer a car for all grades of staff.

SEAT has hinted at shifting roughly 1,500 units next year, the majority being saloons.

However, an estate version, badged ST and based on the old A4 Avant, will come on stream in the summer.

Further additions are on the cards, depending on how the launch goes.

A Multitronic gearbox will arrive later next year, while an ECOmotive low-CO2 version is probable.

So too are sporty FR and Cupra models to reflect SEAT’s sporty image.

Aside from the ‘S’ logo in the centre of the steering wheel boss, everything in the Exeo is borrowed from the A4 Cabriolet.

This means high-quality materials and logical positioning of the switchgear.

The main difference is the use of Servotronic speed-sensitive power steering, which adds far more weight to the steering feel and helps create a feeling of reassurance from the front-end.

I drove the TDI 170 and TSI 200 models, both performing in exactly the way you would expect.

The TDI has plenty of grunt from low down, while the TSI has fizzy power delivery.

However, go for a Sport model (S and SE trim levels are also available) and you get not only 18-inch wheels but sport suspension, which makes the ride very firm and borders on the uncomfortable.

There are also plenty of toys inside to make the Exeo appear a value buy.

With such small numbers to be sold, residuals are likely to be strong for the Exeo, which will help its fleet proposition.

For drivers it offers plenty of kit, Audi quality and a choice of modern engines.

Cynical or not, SEAT now has quick access to the upper-medium market.