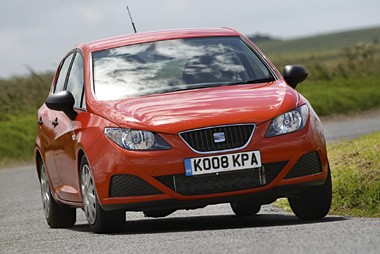 In a sector where style is paramount, the new SEAT Ibiza certainly stands out from the crowd.

While supermini rivals such as the Mazda2 and the forthcoming new Ford Fiesta use sweeping curves to give them instantly attractive shapes, SEAT has decided not to follow the trend and has instead opted for an edgier, more aggressive look.

SEAT calls it its Arrow Design language, and the prominence of straight lines and sharp creases down the car’s sides and the pincered front end certainly make it distinctive. It’s not conventionally attractive, but when any initial shock has worn off it’s easy to appreciate its style statement.

In fact, the straight edges convey an impression of solidity, as if the panels could have been carved from a block of metal and not pressed from sheets.

This feeling of quality extends to the funky interior, with good quality plastics used throughout, and a nice tactile feel to the controls.

While the exterior styling will divide opinion among potential customers, the interior is much more of an obvious success.

This is where SEAT’s image of a youthful brand is most notice-able, as the swoosh of pale grey plastic across the width of the dark grey dashboard of our Sport test car lifts the interior above the class norm, but still stays classy despite its boldness.

The use of light-coloured materials in the cabin gives an airy, spacious feeling, while there is enough room in the back to accommodate two adults.

The Ibiza is the first car to use the new Volkswagen Group supermini platform, which makes the car slightly larger than its predecessor – length is increased by 99mm. Boot space rises by 25 litres to a healthy 292, although there is a high lip to negotiate when loading cargo.

Equipment levels are generous, with Sport trim including
16-inch alloy wheels and sports seats, while the Ibiza also received a maximum five-star rating in the Euro NCAP safety tests.

On the road, the new platform gives the SEAT a more grown-up feel than its youthful styling suggests – it certainly doesn’t charm the driver like a Suzuki Swift does – but the handling is on the right side of sporty and the ride comfort is good on all but the roughest of surfaces.

At low speeds, the steering is light which is ideal for zipping around town, but disappointingly doesn’t shed its artificial feel at higher speeds.

The 83bhp 1.4-litre engine is no firecracker, but gives adequate performance and averaged about 43mpg during the test – not far short of the official combined figure of 45.6mpg.

Altogether, the new Ibiza is an impressive package and – as long as the looks don’t put you off – there is much to commend it for.

The Clio is the cheapest, but does without air-conditioning and alloy wheels.

The Polo costs slightly more but has both as standard, plus a more powerful 80bhp engine.

The Peugeot offers 75bhp and air-con but no alloys, while the SEAT has both and delivers 83bhp.

All four models are easy on drivers’ wallets for benefit-in-kind tax, with costs varying from £25 a month for a basic rate income taxpayer in the Renault to £33 a month in the Peugeot.

The SEAT will cost the same driver £29 a month and the Volkswagen £31.

With 20,000-mile service intervals and small wheels, the Peugeot is the cheapest in terms of service, maintenance and repair over three years and 60,000 miles.

The Clio comes with 18,000-mile intervals while the Volkswagen has variable servicing.

Renault claims the Clio will return average fuel economy of 47.9mpg, which equates to a petrol spend of nearly £6,500 over 60,000 miles.

The SEAT comes in second on 45.6mpg – around £300 more than the Clio. The Peugeot and Volkswagen both return 44.8mpg.

As a result, the Volkswagen’s lower front-end price means it wins. The Clio will retain 28% and the Peugeot 32% of their cost new.

Despite having the highest fuel bills, the Polo wins the wholelife cost comparison and is likely to cost £15,000 over a typical fleet life.

The SEAT is very close behind and will cost just £30 more over the same period. Both benefit from their strong residual value predictions.