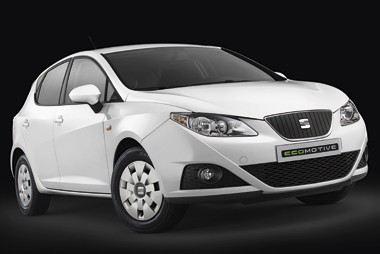 Sub-110g/km of CO2 cars will be all the rage for cash-conscious fleets next April.

That’s when the writing-down allowance rules change: cars emitting CO2 below this level will get a 100% allowance for the first year.

A 1.4-litre turbodiesel – with particulate filter, for fleets with stringent green criteria – it also has headline-grabbing fuel economy of 76.3mpg on the combined cycle.

This will make it, with the Ford Fiesta ECOnetic, the most economical car available in the UK.

It does this without hybrid trickery, and doesn’t even need stop-start or pricey low-rolling resistance tyres, which means SEAT can sell it for an estimated £11,000 – £7,000 less than the Toyota Prius.

SEAT is not making any volume predictions, but one-in-10 of the previous generation Ibiza diesels sold were Ecomotive versions. The UK took 15% of old-shape production – that’s 1,200 cars. Numbers of this one should be larger.

It is the first new-shape diesel Ibiza confirmed to arrive in the UK. In time, 1.6-litre common-rail oil burners will join it, but there won’t be a non-eco 1.4 TDI offered.

SEAT is currently assessing whether to bring over limited stocks of 1.9-litre diesels to satisfy fleet users wanting diesel Ibizas. That car would emit 119g/km of CO2, and average 62.7mpg. A decision is expected soon.

There are some cheap plastics on display inside, but the Ibiza does offer tight assembly with Volkswagen Group integrity.
Indeed, with firm, supportive seats and a good driving position, there’s an Audi air to it – downsizers have little to fear here. The rear is fairly roomy and comfortable, too.

On the move it’s torquey pump-jet injection three-cylinder engine is still clattery, but there are fewer vibrations than before, and pronounced noise at idle fades at a cruise. It’s also got a big-car feel, and good stability at speed.

The ride is irritable, because its tyres are inflated to a high 42psi (that’s a memo to maintenance in waiting), but it does mean the handling is fairly crisp – the car responds to the light, direct steering well.

The tax case is unarguable, and the list price is also highly attractive. The Ibiza is roomy enough to not even be too much of a compromise, and the drive is up to scratch.

The most sensible green car on sale? Your balance sheet will certainly say so.