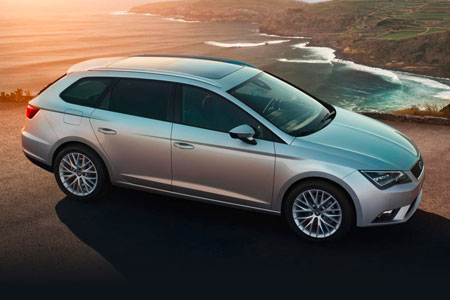 The Leon is proving to be a significant car for Seat. Its previous two generations have been offered only as a five-door hatchback, but the latest version, which arrived in the UK in the spring, was planned with multiple body styles from its inception.

The Exeo, of course, was little changed from the Audi A4 that was finally discontinued in 2009 and gave Seat a relatively quick entry into the D-sector.

The Exeo saloon was rarer than the ST and while it did much to lift the image of the brand, it wasn’t really the best load-carrier.

In fact, the new Leon ST has a much more practical and roomier luggage compartment.

For a start, the minimum luggage capacity is 587 litres – 145 litres greater than the Exeo ST and ahead of many other C-sector and D-Sector estates, including the Ford Focus and Ford Mondeo.

It may not quite have the capacity of the best C-sector rivals with the seats folded and up to roof height, but 1,470 litres will be more than adequate for most, and is almost 300 litres more than the Exeo ST.

It comes with a ‘twin floor’, which allows the loading area to sit flush with the boot lip, or sit lower to expand the luggage area. Customers can also choose a folding front passenger seat to offer 2.5m of load length on one side of the car from tailgate to dashboard.

The Leon uses Volkswagen Group’s MQB platform, which forms the basis of the latest Golf and Škoda Octavia and Audi A3.

It has allowed considerable weight loss compared with previous generation versions and includes a range of hi-tech features. 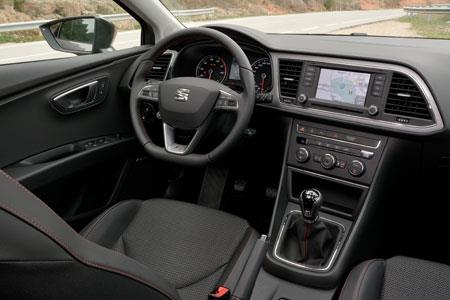 The car also offers post-collision braking (to avoid the car rolling away after an impact, resulting in further crashes), drowsiness detection, high-beam assistant and lane assist.

The Leon ST also offers a radar-based cruise control system, automatically maintaining a set distance with the vehicle in front, as well as adaptive chassis control with both comfort and sport settings.

The Leon will arrive in January, at the same time as new fuel-saving Ecomotive models arrive in the range.

However, the only diesel we have been able to sample so far is the 150hp 2.0 TDI. It has CO2 emissions of 106g/km and fuel consumption of 68.9mpg on the combined cycle.

It’s an enjoyable car to drive, with incisive turn-in and neat handling. Performance from the 150hp diesel is both potent and refined, while the Leon’s interior – something way behind rivals for perceived quality in its previous incarnation – is now among the very best.

Its ride is perhaps at the firmer end of the spectrum, but provides greater comfort than the Exeo ST did, and most drivers (and passengers) shouldn’t find cause for complaint.

Only recently have we been able to expect such strong performance combined with (on paper at least) low fuel consumption, and the Leon ST manages to deliver in a desirable, practical and attractive package.