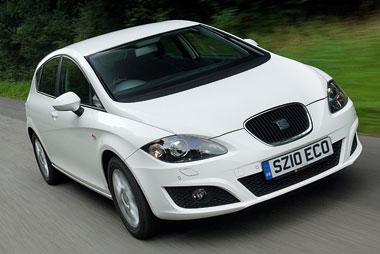 Do looks play a big role in company car choice? Maybe not for the fleet operator who is more likely to be interested in eyeballing the financials.

But speaking to company car drivers who chose the Seat Leon it transpires that looks were a consideration.

One driver plumped for the Leon over a Golf BlueMotion because they thought it looked more attractive.

“It looked more sporty,” was the verdict.

A quick straw poll on the Leon’s looks saw the word ‘sporty’ cropping up a number of times -no great surprise considering Seat is often thought of as Volkswagen’s sporty brand.

But it appears there is fine line that manufacturers need to tread.

There is such a thing as ‘too sporty’ for some company car drivers.

And luckily the Leon stays on the right side of the line.

“The Leon looks sporty but not overtly sporty,” one driver said. “It’s understated.”

I am inclined to agree. But there is one styling feature I’ve yet to get used to – the rear door handles.

To help give the Leon a coupe appearance the handles have been concealed in the door frames.

I rarely need to open the back doors so I’ve still not adjusted to reaching to the top of the door to open them.

And a Leon company car driver agrees that the door handles have confused some of her passengers. But she thinks it’s a small price to pay for a streamlined look. Looks are not the only thing in the Leon’s favour, though.

With emissions of 99g/km and an official combined mpg of 74.3 (although in the real word this is proving to be in around the 55 mark) the Leon also has the environmental and financial arguments covered.