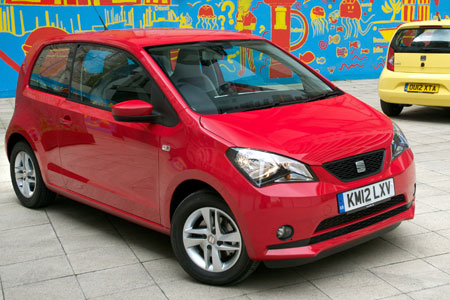 The Mii launches Seat back into the city car sector, a segment it was last in with the Arosa in the late-1990s to mid-2000s.

It sees Seat once more sharing a Volkswagen compact car platform – the Arosa was essentially the same car as the Volkswagen Lupo, while the Mii shares the Up’s underpinnings. (The Skoda Citigo is also built on this platform.)

The requirements of this sector have evolved since 2004. Then, city cars offered cheap and cheerful transport. Now, as well as still offering low running costs, equipment and refinement have both increased to meet customers’ more demanding needs.

For fleets, city cars are mainly restricted to public sector organisations and pool car duties. Diesel engines are uncommon; instead, petrol cars are expected to offer the lowest levels of CO2.

Seat’s answer is an Ecomotive version of the Mii which has emissions of 96g/km.

While it’s important to offer sub-100g/km emissions, it arguably comes at the expense of performance.
On motorways the 1.0-litre three-cylinder engine is sluggish – to the point where I was forced to duck back into the left-hand lane for fear of causing a traffic jam.

I can’t help thinking that for a little more money a Nissan Micra with a feisty supercharged engine (and still only 95g/km of CO2) could fit the bill, although admittedly this is in the next sector up.

But motorways aren’t the natural environment for cars such as this, and build quality is also in the Seat’s favour.

Sharing platform and technology with two other brands has helped to keep costs down and means better quality can be offered at a lower price.

Safety is another strong point. Euro NCAP has applied the Up’s five-star rating to the Mii as the vehicles are structurally identical and have the same levels of safety equipment.

It’s an important factor when you consider that the Toyota Aygo, Citroën C1 and Peugeot 107 (three other cars in the sector which are structurally identical to each other, but admittedly older) recently achieved three stars.

Looks-wise, there isn’t a great deal to choose between the Up, Citigo and Mii. Citigo and Mii are virtually identical on the inside, although the exterior features Seat’s traditional grille.

For a small car there is plenty of interior space, comfortably seating two adults in the back, with decent room for luggage (although the high lip can make it awkward to load).

Some might prefer the nominal sporty appeal that comes with the Seat badge, if not in the Mii’s actual performance.