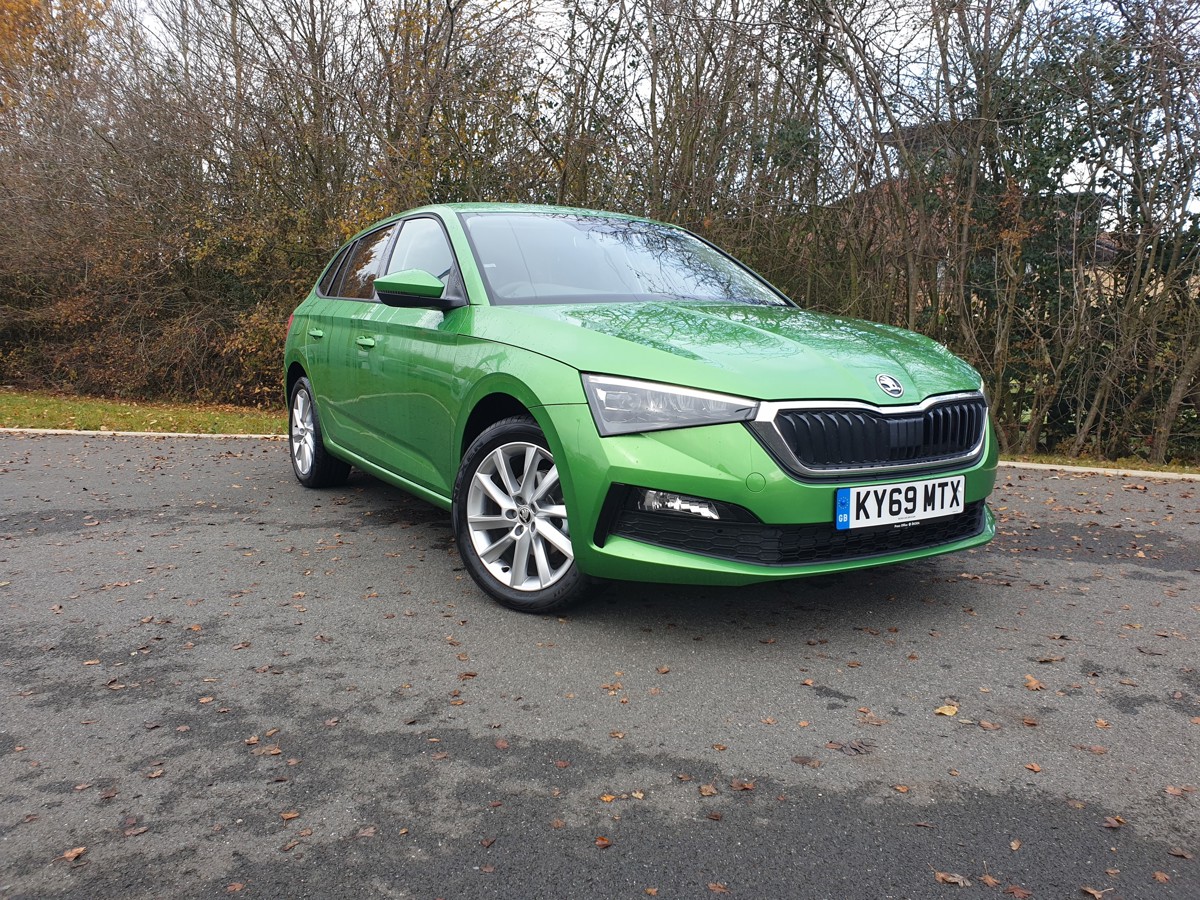 We recently said farewell to the Škoda Scala and I was keen to understand Škoda’s collection and delivery process as my husband has an underlying health condition and was sent a full list of precautions which the brand takes, including sanitising all touchpoints, wiping the key and keyfob with antibacterial wipes and leaving it in the vehicle or placing it in an envelope and posting through the letterbox.

Drivers are instructed to keep a two-metre distance from the customer at all times and complete the handheld device form rather than giving it to the customer.

Škoda also recommends, where possible, leaving test cars for 24 hours after delivery and before collection.

Škoda was flexible and willing to take any extra precautions we felt necessary, although we were happy with the existing process.

The Scala proved a practical car during our seven-month test, with its class-leading boot (467 litres with the seats up and 1,410l with them folded), and ‘Simply Clever’ features, such as an umbrella compartment (including umbrella) in the driver’s door and an ice scraper in the fuel filler flap with a tyre tread depth gauge.

I liked the premium feel of the interior thanks to the use of chrome and the virtual cockpit combined with a 9.2-inch touchscreen (the latter is standard on the SE-L trim, up from 6.5 inches in the entry-level S).

Petrol proved to be a wise choice, particularly with the Scala doing fewer miles during lockdown, and fuel economy was diesel-esque, typically achieving 48-49mpg.

The only blot on the Scala’s copybook was a software glitch at the start of the test, although this was quickly rectified with an update.

Like many fleets we’ve been affected by the halt to non-essential vehicle deliveries during the coronavirus lockdown. Our long-term Scala is currently at Skoda’s workshop in Milton Keynes, waiting to be returned to us after a minor collision repair. It was due to come back at the end April and now we expect it in May, although that could change too if the lockdown continues.

The Skoda press office has been proactive, with regular calls and emails to inform us of the changes and had kindly loaned us another Scala prior to the lockdown while ours was fixed.

Like our long-termer, it is an SE-L (the most popular trim, along with the SE, for fleets) and has the same 1.0-litre TSI 115PS engine. However, it has some sporty additions, including 18-inch alloy wheels (for £680) rather than the standard 17-inch on our SE-L, which don’t make any difference to the CO2 emissions figure (113g/km).

It has also been specified with a sport interior pack, which includes black sports seats, stainless steel pedals and a black ceiling cover for £645. I was already a fan of the Scala’s premium-like interior and this pack gives the car a different feel again.

Complementing the interior is the addition of sport chassis control with drive mode select (£505), which lets you switch between ‘sport’, ‘normal’, ‘eco’ and ‘individual’ modes. Unsurprisingly, the fuel economy suffers by around 5mpg when in ‘sport’ mode compared to ‘eco’ although I haven’t been able to do a long journey to properly assess how economical the ‘eco’ mode is.

The car is finished in ‘race blue’ metallic, which I prefer to our ‘Rallye green’ metallic (although I may be in the minority on that score) and has a tailgate design pack costing £280.

The Scala’s tailgate already features the brand’s new ‘design language’, with Škoda in block lettering instead of the traditional rear badge. I find it Ford-esque, however, and it is arguably a case of change for change’s sake.

One of the Scala’s selling points is its practicality – a trait that has become particularly important to me now that I often travel with my nine-month-old baby.

The Scala’s boot is an ample size to cope with all the paraphernalia that comes with having a baby. It’s class-leading at 467 litres with the seats up and 1,410l with them folded. By comparison, the Volkswagen Golf offers 380l and 1,270l respectively, while the Ford Focus has 341l and 1,320l and the Vauxhall Astra has 370l and 1,210l.

It even outdoes my previous long-term test car, the Nissan Qashqai, for seats up capacity by 37 litres, although the Qashqai’s boot stretches from 430l to 1,585l when the seats are folded. 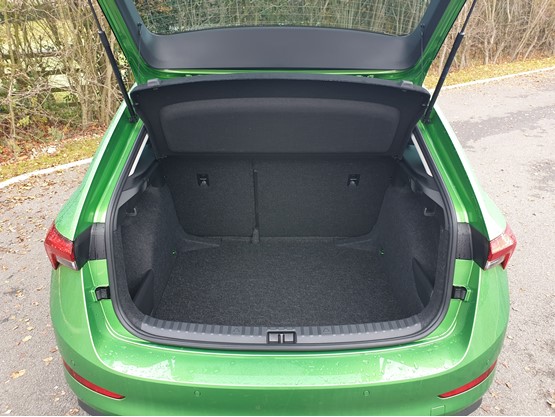 The Scala can be specified with an adjustable false boot floor for £160 and there is the choice of a family package (door edge protection, double-sided boot floor and leatherette protection to the back of front seats) for £200 or simply the double-sided boot floor for £75.   Being a Škoda, there are typical ‘Simply Clever’ features as standard, which are handy for a busy mum, such as an umbrella compartment (including umbrella) and an ice scraper in the fuel filler flap with a tyre tread depth gauge.

Our Scala recently caught the eye of a local business owner, owing to its Rallye Green paint. She stopped me to say she loved the colour. I’m not so sure. It plays to Škoda’s racing heritage, but the Scala isn’t sporty enough to pull it off.

From Škoda’s point of view, if it gets businesses noticing the brand then all the better. 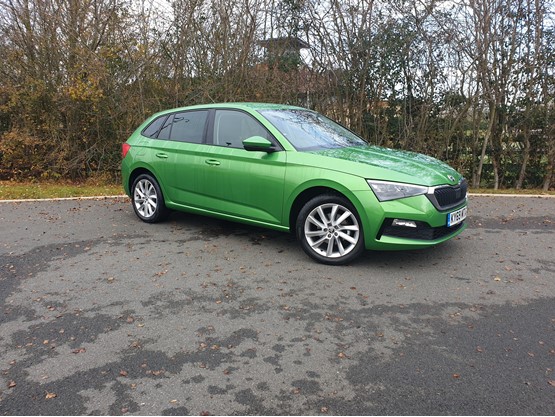 Head of fleet Henry Williams recently admitted the focus for Scala last year was retail, although fleet still took more than half (55.6%) of its 1,658 sales. Of that, 20% went to true fleet, according to the brand’s own figures.

Since the start of the year, however, Williams says Škoda has been “ramping up Scala for the fleet sector” with marketing targeted at corporate end user customers and conversations with core fleet customers about how to make the Scala more attractive to their business. It’s paying off as in January fleet had a 70.4% share of the 440 sold, with 34% of that being true fleet. Williams expects the true fleet mix to be around 30-35% this year.

Fleets are opting for a mix of SE and SE-L, dependent on whether the driver wants a built-in sat-nav (standard on the SE-L, while the SE has Apple CarPlay and Android Auto).

I recently experienced the equivalent of Apple’s spinning ‘wheel of death’ in the Škoda Scala when the infotainment system and sat-nav kept crashing. Restarting the engine didn’t fix it so it went back to Škoda for a software update.

It’s not an isolated incident as Motoring Research had similar issues with its test car last year. However, since the update, the system has been trouble-free and has been put to the test on a 152-mile round-trip to the north Norfolk coast. There were hold-ups on both legs of the journey and the sat-nav re-routed us, where possible, thanks to real-time online traffic updates.

The journey also allowed me to put the Scala’s 1.0-litre three-cylinder petrol engine through its paces on a mixture of dual carriageways, rural and urban roads. It returned a fuel economy figure of 48.6mpg – in line with the WLTP combined rating of 43.5mpg-49.6mpg – and proved a comfortable cruiser at speed, although I would appreciate more grunt when pulling out onto a dual carriageway.

The interior is appealing with our SE-L model benefitting from a 10.25-inch virtual cockpit which has a choice of five views (classic, extended, basic, modern and sport). The virtual cockpit combined with the 9.2-inch touchscreen (up from 6.5 inches in the entry-level S) and use of chrome, gives the Scala’s interior a premium feel. 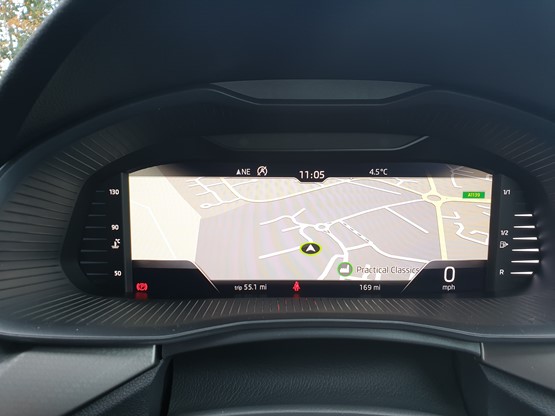 Škoda has kept manual buttons to turn the air conditioning on and off and adjust the temperature but the fan speed has to be controlled via the touchscreen which is a bit of a faff - there is an Auto setting, thankfully.

Another quirk is that the lane-assist (standard on the Scala) can be switched off but each time the car is restarted it comes back on.

I prefer to switch it off as I find it is too eager to tug at the wheel on some rural roads near my house.

The Scala, which is Škoda’s answer to the Volkswagen Golf, Ford Focus and Vauxhall Astra, has joined our fleet for the next six months.

It hopes to tempt fleets with the traits that Škoda has become known for – size and value for money.  Despite being built on the same MQB-A0 platform as the Volkswagen Polo and Seat Ibiza, the Scala is remarkably spacious. Its boot is class-leading at 467 litres with the seats up and 1,410l with them folded. That compares with 380l and 1,270l in the Golf, 341l and 1,320l in the Focus, and 370l and 1,210l in the Astra.

Rear passengers enjoy the same kneeroom as in the Škoda Octavia and, while fleets could arguably opt for the Octavia hatch, the Scala has a cheaper price point, with a P11D value of £17,515 for the entry-level S compared with £18,405 for the Octavia S.

We’re testing the top spec SE L. It has a long list of standard features including a virtual cockpit and generous 9.2-inch touchscreen, which give the Scala an upmarket feel.

Being a Škoda, there are a number of ‘Simply Clever’ features such as an ice scraper with a tyre tread depth gauge.