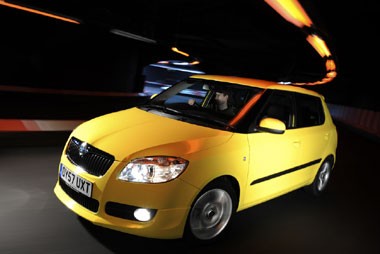 Give me a second while I scrabble around for my sunglasses.

This Skoda Fabia Sport, with its sprint yellow paint job, is one seriously bright car.

Skodas have never been particularly known for their style and I don’t have much time for the looks of the latest Fabia, but this Sport model, sprayed in an atomic lemon hue, is an eye-catching motor.

The Sport trim level comes in above the Fabia 2 and adds a bit of aggression to the normally docile Fabia demeanour.

The retina-scorching paint is available across the Fabia range, but really comes into its own when combined with the Sport’s visual boosters.

These include a deeper front spoiler, 16-inch alloy wheels, rear spoiler and diffuser and a dirty great chrome exhaust.

Inside, sports seats and a leather-covered steering wheel give an atmosphere of, well, sportiness.

But this warm hatch is designed to give an entertaining drive without the headache of big fuel bills and high emissions.

Consequently, the pick of the engines is a 1.9-litre TDI diesel unit with 105bhp. It’s a peppy little beast with peak power arriving at 4,000rpm and 177lb-ft of torque available from 1,700rpm.

It even sounds nice and burbly through the exhaust at higher revs.

From standstill, 62mph arrives in 10.8 seconds, which doesn’t sound particularly quick but the throttle response is perky.

The ride feels rather jerky, particularly on the motorway, but it does make things fun through the bends.

It adds a sense of drama without feeling like the car is going to tip over, and doesn’t detract from the chassis’s inherent nimbleness.

The steering is well weighted and provides a decent level of feedback.

The sports seats, while not as hugging as those found in the older and more hardcore vRS, are laterally supportive enough to keep you in place should spirits run high.

The Fabia interior is pretty utilitarian and isn’t going to win any design awards, and some of the materials feel pretty cheap.

It’s more wipe-clean than luxury, but is solid and well put together, as one has come to expect from products from within the Volkswagen Group.

Air conditioning comes as standard, as does an auxiliary input socket for the stereo, so drivers can enjoy tunes from their MP3 player.

Elsewhere in the car, there’s enough room for two adults in the back – three might be a bit of a squeeze for all but short journeys – and the boot will happily take a handful of suitcases.

A flexible compartmentalising piece of plastic is also included to stop shopping or odds and ends flying about in the back.

It’s not quite up to the driving excellence of the Fiesta and Corsa, but it is fun nevertheless, and cheap to run – 57.6mpg and reasonable emissions of 129g/km should keep the fuel and tax bills low.

P11D PRICE
First blood to Skoda. Not only is the Fabia the cheapest to buy, but it’s also the most powerful with 105bhp. All the rest have around 90bhp and are very similarly specced, although only the Skoda and Corsa have sports seats included as standard.

EMISSIONS AND TAX RATES
The Fabia is the most polluting of the quartet. It will cost a 20% taxpayer £37 a month in benefit-in-kind tax, against £38 for the cleaner but more expensive Corsa. The Fiesta and 207 both emit less than 120g/km, making the bill for the Ford £27 and £28 for the Peugeot.

DEPRECIATION COST
The Skoda holds its value much better than its rivals. CAP estimates that after three years and 60,000 miles it will retain 37% of its cost new – mainly due to lower volumes. The Fiesta will keep 33%, as will the Corsa, while the Peugeot will manage just 32%.

WHOLELIFE COST
Thanks to solid performances in all areas, the Fiesta is cheapest to run over a three-year/60,000-mile fleet life. The Fabia slips up on fuel economy and servicing costs. The Corsa scores well in SMR terms, while the 207 is economical, but is outclassed elsewhere.

VERDICT
While the Fiesta is the cheapest to run overall, it’s a car right at the end of its production life and is due to be replaced with an all-new and far more striking model later this year.

The Corsa is a good car but can’t compete on numbers, and the 207 is too expensive to buy compared to its rivals and doesn’t hold up when examining residual values.

The Fabia, on the other hand, will cost just £300 more to run than the Ford over three years and 60,000 miles and is a much newer car.

Consequently, it is the obvious choice to keep fleet managers happy, and drivers surely won’t baulk at the highest BIK bill of £38 a month.