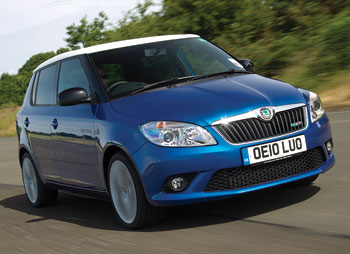 The old Skoda Fabia vRS had a cult following among the hot-hatch loving British car buyers.

It appealed firstly because it was based on one of the most sensible five-door small cars on sale and, secondly, it was available only as a diesel.

The second-generation Fabia vRS signals a significant change in direction, and maybe not for the better.

Yes, it might be quicker than before with 50bhp more, and adopts the latest technology with a seven-speed DSG transmission as standard.

Quality is better than the previous version, and it’s more spacious and feels more modern.

But looking at the bare statistics it’s harder to see where progress has been made.

The new model has a 180bhp 1.4 TSI equipped with supercharger and turbocharger.

But compare fuel consumption and the costs equation is much higher for the new model: it achieves 45.6mpg on the combined cycle, compared with the old diesel version’s 53.3mpg.

The petrol has an advantage on BIK tax with the original model’s 3% diesel supplement putting it in the 20% tax bracket for this year, compared to 19% for the new TSI model.

But the higher price of the new model compared to the earlier version means it’s still a costlier car in tax bills for drivers.

The new Fabia vRS is very good, but we think it’s a shame Skoda abandoned it’s original formula to serve up a vehicle which in its performance and power delivery is already like two other Volkswagen Group cars in its sector, and presumably will also be similar to the forthcoming Audi S1.

Compared to its Volkswagen Group counterparts, the vRS has its own character, and would be cheaper to tax due to its lower P11D price.

But think how much more appealing it would be using the latest diesel technology.