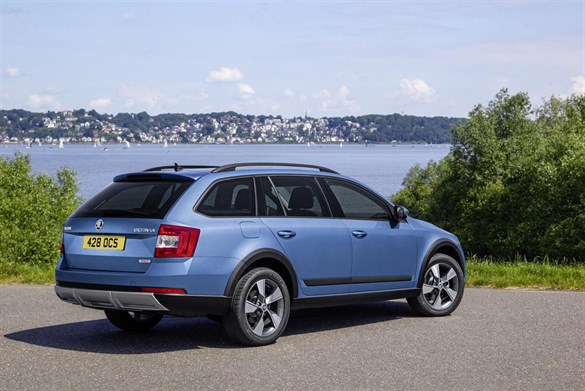 Škoda’s Octavia was among the first to follow Audi and Volvo down the less-travelled Allroad and XC routes, and there have been many other manufacturers to jack up an estate car and add a four-wheel drive option since.

The Octavia Scout is about to arrive in the UK in its second generation. Based on the Fleet News Award-winning Octavia estate, the new Scout is expected to have a larger presence on the road, according to Alistair Stewart, brand director for Škoda in the UK.

The previous Scout, loved as a cost-effective go-anywhere bluelight and rapid response vehicle, took about 10% of Octavia estate sales.

The current-generation Octavia estate is already enjoying a higher profile than its predecessor.

Stewart said the new Octavia Scout should reach almost 2,000 units in the UK in a full year, with fleet sales taking around two-thirds of its volume.

With prices starting at a little over £25,000, the Scout has equipment based on SE versions of the Octavia.

Power is transferred to the wheels via a fifth-generation Haldex clutch. It means the front wheels are driven all the time with torque being transferred to the rear when sensors detect slippage at the front. An electronic differential control system on the front wheels also means that the brakes can be applied to both if they are slipping should even a sole rear wheel be the only one left with any hope of traction.

The Scout’s interior looks and feels quite sophisticated, with a choice of brown or black leather and Alcantara trim on the seats as well as standard sat-nav.

The test route included a long track with some short muddy sections as well as a purpose-built off-road course with some steep inclines. The Scout took it all in its stride.

On the road, the slightly elevated driving position and good seat design, as well as low noise intrusion and smooth engine, means the Scout driver could spend many hours a day behind the wheel in comfort.

The Scout is a true multi-purpose car that feels confident and comfortable regardless of the driving environment.