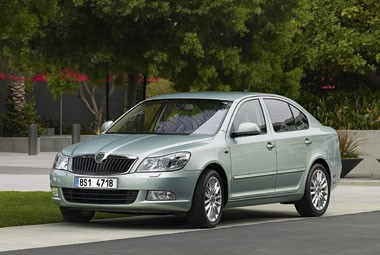 2008 was a landmark year for Skoda in the UK, with fleet sales out-stripping retail demand for the first time.

And it was the Octavia which helped push Skoda to new heights among corporate motorists.

With around 10,000 Octavias sold to fleets last year, the model was the biggest seller in the range. Now there’s an updated version which the manufacturer believes will help it to further success.

The changes made are most apparent at the front, where new headlight units have been grafted on, flanking a new grille which echoes the corporate look of sister models such as the Superb.

At the rear the changes are again centred around the new light units, although the rear bumper unit is all new and incorporates red reflector units.

Under the bonnet come a range of new TSI petrol engines borrowed from parent company the Volkswagen Group.

Despite its diminuitive capacity, this engine delivers its power in a smooth manner, revving cleanly through the rev range and not becoming harsh or noisy when its is pushed.

With 122bhp it has much more power than entry-level versions of rival lower-medium models, and thanks to the standard six-speed manual gearbox is settles into a relaxed manner at motorway cruising speeds.

The underpinnings are unchanged, which means the Octavia remains a solid, if uninspiring drive, with none of the verve of the Focus or Astra.

But drivers can console themselves with an improved interior layout which adopts much common switchgear and architecture from Volkswagen Group models.

And there’s plenty of room inside too.

As well as decent legroom for two adults in the back seats, the boot is much larger than rivals.

With 560 litres of volume with the rear seats in place, the Octavia dwarfs the Focus (385 litres), Golf and Astra (both 350 litres).

The equipment list may not be lavish, but then neither is the price tag.

The Golf’s entry price is high and it is the least powerful car here with 80bhp, the same as the Focus.

The Astra delivers 90bhp but the Skoda is way ahead with 122bhp thanks to its TSI lean-burn petrol engine.

Only the Volkswagen and Skoda offer air-conditioning as standard.

With the lowest emissions and cheapest front-end price the Astra is the place for tax-conscious drivers to turn.

It will cost a base rate taxpayer £32 a month in benefit-in-kind tax, compared to monthly bills of £37 in the Octavia and Golf, and £40 for the Focus.

All run on 15-inch wheels, so tyre costs will be similar.

The difference comes down to service intervals: the Vauxhall needs attention every 20,000 miles, the Ford every 12,500 miles, while the Golf and Skoda have variable intervals, although the Octavia’s group 8 insurance (the rest are group 4) spells higher repair bills.

The Golf returns a claimed 44.1mpg, which is slightly better than the Skoda and Focus which both return an average of 42.8mpg.

Despite its much higher front-end price, the Golf’s residual value sees it surge ahead.

The Golf’s strong residual value performance sees it ease out a 1.3 pence-per-mile advantage over the Astra in second place.

The Octavia’s challenge is blunted by having the highest SMR and fuel costs, although it does pull back some ground thanks to its residual value.

The Focus is the first car to be dismissed thanks to its combination of highest running costs and most expensive driver benefit-in-kind taxation levels.

The remaining trio all make strong cases for themselves – the Astra offers drivers the lowest tax bills, the Golf is easily the best on wholelife costs while the Skoda’s combination of space and value for money is unbeatable here.

Ultimately though, the Octavia costs too much to run compared to the Volkswagen and Vauxhall. And of those two, the Volkswagen takes the win. It is cheaper to run, is a much newer vehicle (the Astra will be replaced later this year) and is better equipped.