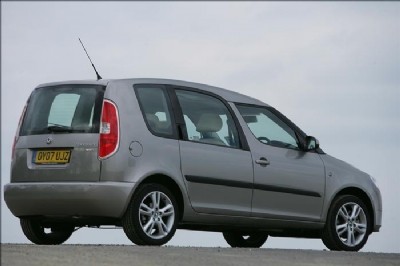 It’s time to say goodbye to our Roomster after a year’s stay.

I’ve been driving it for the past six months, though it feels like a lot less as my faithful chariot has been just that – faithful, problem-free and a pleasure to drive.

It took a while to overcome my initial reservations.

The most obvious being the aesthetics. An odd-looking beast, this van/MPV hybrid takes a bit of getting used to.

My other concern was the Roomster’s size.

Though perfect for families, as other Fleet News reviewers have commented, I thought the space unnecessary, being single with no children or animals to cart around.

Six months later and its capacity and looks are what I’ll miss the most.

The styling may be unconventional but it is an awfully useful car.

The Roomster’s weird features have provided friends with plenty of ammunition.

It’s been unfavourably likened to a Popemobile and a hearse.

I’ve found the tune soon changes when they settle down, with plenty of space to spread their legs and admire the view.

Along with well-accommodated passengers, the back of our Skoda long-termer has carried everything from bicycles, ladders, plants and tons of luggage.

The car’s VarioFlex seating system allows you to slide, fold and even remove the rear three seats, with up to 1,750 litres of potential space available.

Long journeys have flown by thanks to comfortable seats and the cabin’s ergonomic design.

I’ve grown quite attached to the leather steering wheel and chunky gear knob and the stereo is easy to reach and navigate.

Like the back of the Roomster, the cabin also has plenty of cubbyholes and storage space.

However the feel-good driving environment is dampened slightly by the front and side pillars restricting visibility.

The only other real bugbear, both with myself and others on the Fleet News team, has been the interior colour.

After a year-long onslaught from children and winter clothes the beige seats are noticeably muckier.

As well as being a solid and specious vessel. the Roomster has proved itself to be an excellent performer.

I’ve actually looked forward to the daily commute. With its 1.9-litre turbodiesel engine and surprisingly good handling and suspension the car has been fun to drive.

And despite my dubious eco-driving abilities the fuel economy is pretty good.

With a wary eye on the rising price of diesel I’ve been especially thankful for the Roomster’s 48mpg average.

Looks, indeed, can be deceiving.

The first thing that you notice about the Roomster is that it is not pretty.

But it wasn’t built to be pretty.

Marketed as a family/utility vehicle it is comfortable and has, as the name suggests, loads of space, as well as providing a good driving experience.

And one thing’s for sure, it’s not a car you forget in a hurry.