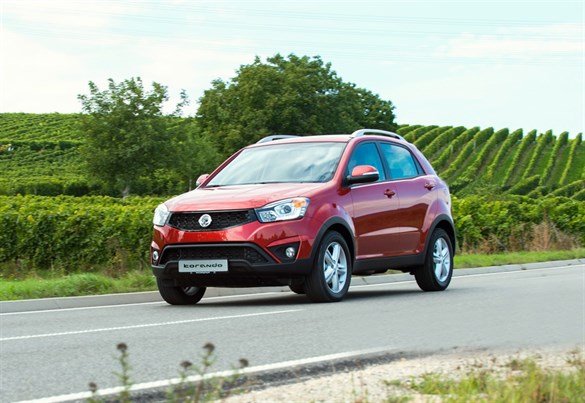 The budget compact SUV sector has become a more hotly-contested market since Ssangyong launched the original Korando in 2011.

While brands such as Kia and Hyundai have moved upmarket, the past 12 months have seen the arrival of the Dacia Duster, Suzuki SX4 S-Cross and, at the top of the sector, the facelifted Mitsubishi ASX.

In response, Ssangyong has launched a revised Korando, which features updates both inside and out.

Exterior revisions include a slimmed-down, black mesh radiator grille and new headlights with daytime running lights, as well as new light clusters at the rear.

Inside, the Korando features a new dashboard with more soft touch materials than before, although there is still plenty of hard plastics which give a brittle feeling to much of the cabin.

Despite this, the interior remains highly practical; it is spacious with plenty of room for five adults, while the rear seats also recline for increased passenger comfort.

The Korando’s boot is large too, offering 486 litres of space, which is 47 litres more than the Nissan Qashqai.

However, while the cosmetic improvements undoubtedly bring the car more up to date than its predecessor, it still feels one generation behind the majority of mainstream compact SUVs which, given its lower P11D price, is perhaps no surprise.

On the road, the dated feeling continues. Ssangyong says it has made great advances in reducing noise, vibration and harshness in the Korando compared to its predecessor, with engine noise levels 9.3% lower in the revised model.

But the 2.0-litre diesel in our two-wheel drive SE test model is still a noisy unit, although its 149hp does provide ample acceleration.

Its vague six-speed gearbox doesn’t do much to improve the driving experience.

Strongly in its favour is an impressive braked towing weight of 2,000kg, which has seen it win awards as a tow car.

The Korando rides well on main roads, although there is a noticeable amount of body roll when cornering.

Running costs may reduce its appeal to fleets: a CO2 emissions figure of 147g/km puts it in the 25% benefit-in-kind tax band, while an official fuel economy on the combined cycle of 47.1mpg falls well short of some rivals.

The Korando is also available with four-wheel drive, and P11D prices for these versions start from £16,265 for
SE trim.

Powered by the same 149hp engine as the model tested here, it has an official combined fuel economy of 45.6mpg and CO2 emissions of 157g/km.

Euro NCAP is yet to test the Korando.