IF exporting a car was easier, this space would not contain a review of the Subaru Impreza WRX STi Spec D.

Instead, the car and your maniacally laughing correspondent would be roaring through deserted roads in rural Mexico.

Alas, customs said I needed documents I didn’t have, so I had to face my most difficult test since joining Fleet News – handing back the keys to a quite awesome car.

At a standstill, it’s rather difficult to see the attraction. The Spec D tag stands for discreet – here’s an Impreza that’s trying to tone down its lairy image.

Gone are the gold wheels and the massive rear wing. The Spec D has modest silver alloys and a smaller spoiler, but still looks like it could tear something limb from limb. Massive arches, new, frowning headlights and a bonnet vent that could suck in passing children mean it’s still an aggressive looking car.

The interior is pretty shoddy by modern standards but this car doesn’t exist to look good or impress with cupholders. What you get for your £28,540 is a ferocious, 2.5-litre turbocharged engine and a chassis capable of defying the laws of physics.

Turn the key and the flat four engine barks into life – blipping the throttle is enough to send shivers up the spine.

The gearshift is short and rather heavy, but accurate. Notch it into first, put your foot down and all hell breaks loose. 0-62mph arrives in five seconds dead, which is quick in anyone’s book, but in the STi it’s a brutal five seconds – a quite different experience from other more refined but similarly quick cars.

Amazing as the acceleration is, it’s nothing compared to the cornering. Hi-tech electrickery means the suspension – coupled to an amazing chassis – adapts to the roads and the semi-slick tyres will hold on round bends at speeds you wouldn’t think possible. I ran out of nerve way before I felt I was going to run out of grip.

As a driving machine, the Impreza is amazing. However, as a company car it’s less attractive.

Officially, fuel consumption is 25.9mpg, but when pressing on it’s going to be in the low teens. And don’t think you can get away with regular unleaded – this rocket demands high octane satisfaction.

VERDICT
IT will give fleet managers nightmares, but drivers looking for performance with few concessions will love the STi. At least until they lose their licences. 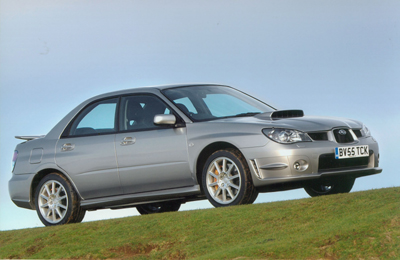