BELIEVE it or not, this is the new-for-2006 Subaru Legacy. I say this because it is virtually identical to the new-for-2004 Legacy. But under the skin there are plenty of changes.

The most notable one for fleets is the introduction of a new 2.0-litre flat-four engine, offering lower emissions, better fuel economy and cheaper company car tax bills.

Replacing the previous 2.5-litre engine, the 2.0R brings the price of Subaru’s range-topping saloon down to £16,995 for the basic model.

But thanks to specification upgrades even the 2.0R is well equipped, with climate control, cruise control, front, side and curtain airbags and 17-inch alloy wheels all fitted as standard.

Also included in the price is the full-time four-wheel drive system common to all Subarus. The introduction of the 2.0-litre model is part of a range of changes to the Legacy line-up. All 2.5-litre models have been dropped, with the exception of the jacked-up Outback estate version, while small detail changes include chrome headlamp reflectors, a new front grille and, wait for it, new wheel cap centres.

Subaru is targeting European prestige sports saloons with the new Legacy, so it has also been to work on the interior. New materials are used with added textures, while extra padding has been used around the cabin to create a more quality feel.

Factor in Subaru’s legendary reliability – there’s a reason so many farmers buy them, they never go wrong – and the 2.0R makes a strong case for itself as an affordable four-wheel drive saloon or estate.

The revised Legacy range is a value-for-money package for drivers not too obsessed with the badge on the front of their car.

But on the road it soon becomes apparent that its flat-four engine hasn’t got enough power to make the Legacy a sports saloon. The main problem is a lack of torque – 138lb-ft is a low figure – and faced with anything other than flat roads it struggles to accelerate.

At least it rides well, with supple suspension making long distance work not too much of a chore. But the handling suffers from that scourge of most four-wheel drive cars – understeer. Try to push on while travelling along twisty back roads and understeer soon makes its presence felt. It’s best to back off and concentrate on keeping the engine on the boil to make up for that lack of torque.

A quick blast in the Spec B model shows what the Legacy chassis is capable of. With 245bhp and 219lb-ft of torque, the Spec B provides performance more akin to the firm’s sporty Impreza offerings.

ACCEPT the fact that the Legacy 2.0R is no sports saloon and you won’t be disappointed. It’s a well-priced, well-built saloon or estate with four-wheel drive and plenty of equipment. The Spec B is great, but the emissions are disastrous. 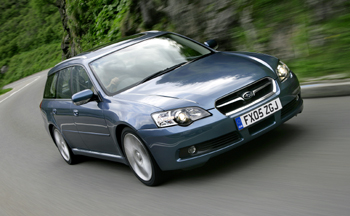 Forester gets a fettling

AS well as revising the Legacy, Subaru has also been to work on its Forester SUV.

The most obvious change is the facelift, grafting on new headlights, front wings, bonnet, bumper and grille.

I’ll leave it to you to decide if it’s been successful, but to my eyes the Forester has lost some of its rugged charm, replaced by a bland imitator.

Never mind. At least there have been some improvements under the skin. A new 2.0-litre flat-four engine joins the range, powering both the 2.0 X and XE models. It produces 31bhp more than the old unit, meaning the Forester now offers 157bhp – raising the top speed from 112 to 122mph and cutting the 0-62mph sprint from 11.1 to 9.4 seconds.

The full-time four-wheel drive system from the previous generation carries over, although the chassis has been worked on to reduce roll in corners and boost road holding.

The revisions certainly work, and the Forester offers a far more car-like drive than any of its SUV rivals such as the Nissan X-trail and Honda CR-V.

Inside, better quality materials have been used which certainly look and feel better than the plastics used in the old model.

The range has also been simplified, with the 2.5 XT replacing the 2.0 turbo.

With 227bhp and a bulging bonnet intake scoop, the XT certainly looks the part, and it sounds it, too, with a lovely flat-four burble at high revs.

This model is the pick of the range if emissions and economy are not priorities. But for fleets wanting a rugged, capable off-roader which also drives well on the road, the 2.0 is not too much of a compromise. 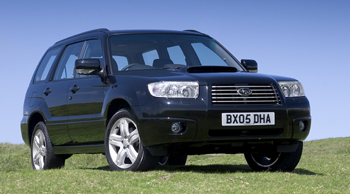