ASK anybody what image the Suzuki Grand Vitara conjures up and invariably the words ‘pink’ and ‘hairdresser’ will crop up somewhere in the description.

Shaking off the spectre of those tinny things of the late 1980s has been a long process.

The Vitara brand once had the solemnity of bubble gum but that has changed, in part due to the numbingly dull version this new model replaces, but mainly due to this, a handsome, scaled-up Tonka toy.

The new Grand Vitara takes the simple, confident lines of the Swift supermini, making it the best-looking SUV you can buy, although our test car came in the staggeringly naff colour of metallic beige, which managed to negate most of its blocky charm.

The interior fixtures look to have been lifted straight out of the Mazda parts bin, which is no bad thing. Everything is neatly arranged on the central dash and lightened by a couple of metallic strips.

The seating position is decent and there is good space in the rear for passengers and a useful boot.

But the 140bhp 2.0-litre petrol engine struggles, particularly compared with the torquey diesels usual for cars in this sector, and the situation is not helped by the gearing, which is restrictively short. 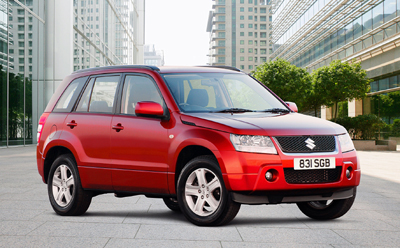 Perhaps the short gearing is trying to hide a deficiency in pulling power. It hasn’t. It is noisy and slow: the Grand Vitara dawdles to 62mph from standstill in more than 12 seconds and it’s no keener to accelerate from speed.

In top gear, the engine revs like a supermini and with 3,500rpm at 70mph it is not a relaxed motorway cruiser. In fact, it is painful. The diesel alternative uses a 130bhp 1.9-litre engine supplied by Renault, which is an excellent unit. I think it’s fair to assume, even without driving it, that this is going to be the one to go for, even though it costs £1,300 more.

Suzuki has made more than a token effort with the car’s off-road ability. All five-door models get permanent four-wheel drive with central differential lock and four gearbox modes: high range for general driving, high range with differential locked for mud or snow, low range for off-roading, and neutral.

Previously, the Grand Vitara was built on a somewhat agricultural ladder frame construction, which meant it handled like a tractor on-road, but also handled like one off it.

This time, Suzuki has opted for a more modern monocoque approach to which it has built in a ladder frame of sorts to give the car’s body extra stiffness for off-road handling.

There’s certainly no stomach-churning wallow round corners but on urban roads, the suspension felt surprisingly stiff.

There was also a fair amount of suspension noise when the springs and dampers were asked to travel over longer bumps.

The Grand Vitara has a lot going for it, but has failings which heavily detract from what should be a good car – in particular, the engine and gearing. I dread to think what the 1.6-litre petrol version must be like.

Suzuki Swace long-term test | how does it compare to rivals?

How does the Swace compare more widely on the ‘fleet fundamentals’, such as tax and efficiency against its natural competitors?