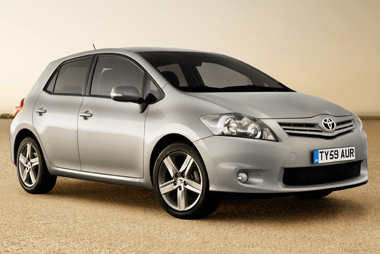 The Toyota Auris has never had much appeal for user-choosers, but Toyota is hoping this mid-life facelift, which heralds a new sub-100g/km version, will grab their attention.
The Auris is competent but does little to stir the emotions.

It suffers when placed on choice lists alongside desirable models like the Volkswagen Golf and Honda Civic.

However, changes for 2010 address some of the criticisms levelled at the car since its launch three years ago.

It looks sharper at the front and neater at the rear, while the cabin has undergone revisions with the addition of soft-touch material on the dashboard and user-friendly switches.

The engine line-up has been revised – customers can choose between a 99bhp 1.3-litre petrol engine using stop-and-start technology, or a 130bhp 1.6-litre engine.

Toyota has dropped two larger diesel engines for the Auris in the UK – the 2.0-litre and 2.2-litre – restricting the choice to an 89bhp 1.4-litre D-4D.

As well as excluding two larger diesels, Toyota has also decided to rule out a lower CO2 version of the 1.4 D-4D for the UK.

The version on UK price lists produces 89bhp with CO2 emissions of 125g/km for the standard manual.

Other markets will get a 118g/km version, which would have resulted in a BIK tax rating of 13% compared with 18%. Toyota’s reasoning is that the lower-emission version would carry equivalent to a £500 premium over the standard car.

, despite riding on smaller alloy wheels and switching to manual air conditioning instead of automatic climate control.

The 1.33-litre engine is refined and nippy enough for use around town although sometimes falters when faced with inclines on motorways forcing a downshift or two to maintain momentum.

The 130bhp 1.6-litre doesn’t feel much livelier but feels happier with motorway cruising, although neither of these petrol engines has particularly low emissions. For example the 1.33-litre engine, which includes a stop-and-start system has similar CO2 emissions to the 1.4-litre Honda Civic, which has no specialised fuel-saving technology.

Residual values should be improved, not only because of the effect of a revised model, but Toyota has also committed to cutting back on short cycle rental business in 2010, and its share of the fleet market is expected to reduce.

The introduction of the Auris hybrid in the second half of 2010 and increasing availability next year will lead to Toyota’s fleet share increasing once again.

Although the Auris is improved, there is little that makes it stand out over some very capable competition in this sector, other than being dependable, well equipped and comfortable.

However, the hybrid version in the pipeline will have much more to recommend it to fleets when it arrives in July, especially with CO2 emissions of 89g/km. Until then, the Auris is likely to be almost invisible in the fleet sector.