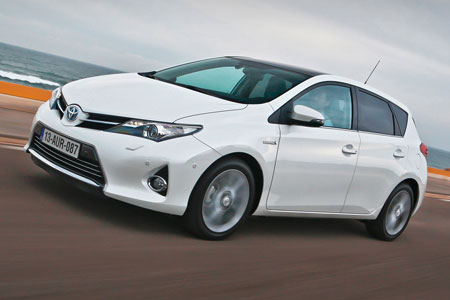 Britain’s best-selling compact hybrid car is poised to win greater showroom success in future –thanks to a little help from the taxman.

“We are traditionally conservative when it comes to predicting sales, but cutting the first year capital allowance threshold from 110g/km to 95g/km in April should have a big impact on take-up of the Auris Hybrid,” said Toyota GB vehicle marketing general manager Chris Hayes.

“The more stringent regime promises to play a significant role in increasing the popularity of this car and we’re expecting to sell around 3,300 to fleets this year, rising to around 5,600 in 2015.

“Even though our new line-up includes a vastly-improved diesel version, the hybrid is the better proposition because it has reduced servicing and maintenance costs as well as steering drivers clear of the 3% diesel surcharge.”

Dramatically better looking and with a higher-grade finish, the new model gets improved aerodynamics from a 55mm reduction in height and is £615 cheaper than its predecessor.

Detail changes to the drive system control logic have also improved driving performance, although the continuously variable transmission still sends the 1.8-litre engine spinning at a seemingly excessive rate when acceleration is needed on motorway inclines.

For the most part, however, the hybrid hatchback has a more subdued and refined demeanour in its latest guise, which features better detailing, improved comfort and thicker sound-deadening material.

Relocating the hybrid battery pack from the boot to beneath the rear seat has removed a major criticism. Luggage capacity is no longer compromised and the 360-litre volume now matches that of conventional versions.

Along with suspension revisions, the change has also benefited handling by lowering the centre of gravity to improve stability at speed and reduce body roll during cornering, although the car still trails the class leaders in overall handling ability.

With the Auris, Toyota GB is launching a fresh grade structure – Active, Icon, Sport and Excel.

The mid-range Icon trim is expected to be most popular with fleets and includes alloy wheels, six speaker DAB audio, a multimedia control screen, rear parking camera, push-button start, fog lamps and power-operated windows all round.